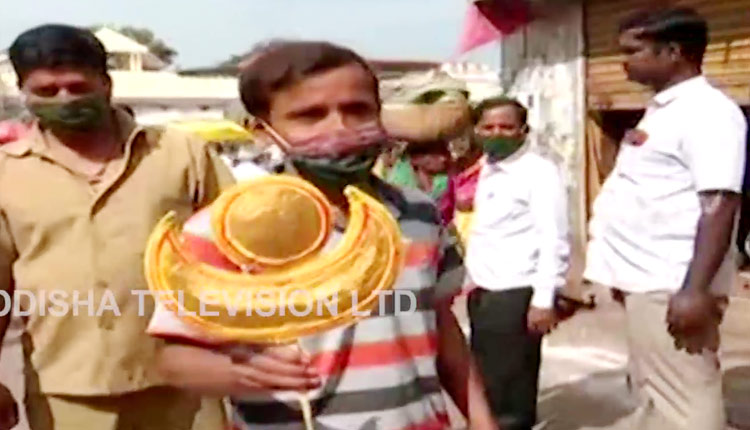 Puri: The Shree Jagannath Temple Administration (SJTA) on Saturday ordered a probe after an employee of the temple was seen carrying a decorative piece used in the Nagarjuna Besha of Lord Jagannath to the house of a senior servitor of the 12th century shrine.

According to sources, an ornate sun and moon used in the rare attire rituals of Lord Jagannath and Balabhadra was allegedly taken to a senior servitor’s house.

The temple staff, Akshaya Barik has also admitted that the decorative piece was being taken to a servitor’s house and said one Ram bhai had asked him to take the item from the Srimandir Garada (temple storeroom) to his house.

The incident has come as a surprise for many especially in the backdrop of Odisha government’s announcement that the costumes of Nagarjuna Besha will be religiously preserved after completion of the rituals. A decision in this regard was approved by the Chhattisa Nijog and temple managing committee.

As per the decision, the attires were supposed to be conserved in the museum to be constructed under ABADHA scheme on the premises of Jagannath Ballav Mutt for devotees.

Meanwhile, the incident has drawn flak from various sections of people. Rajat Pratihari. the secretary of Garabadu Nijog said, “As the Nagarjuna Besha is a rare avatar of the Lords, the Srimandir administration has decided to preserve it. So it is not appropriate to take the costumes of the besha. The matter needs to be probed and proper action should be taken.”

SJTA chief administrator, Krishan Kumar has confirmed that Administrator (Rituals) will probe into the matter.

“We will certainly inquire into the matter and action will be taken whoever is found responsible. All costumes which were prepared for the besha and those decorated and others unused will be catalogued. The investigation will be conducted under the supervision of the Administrator (Rituals),” said Krishan Kumar.