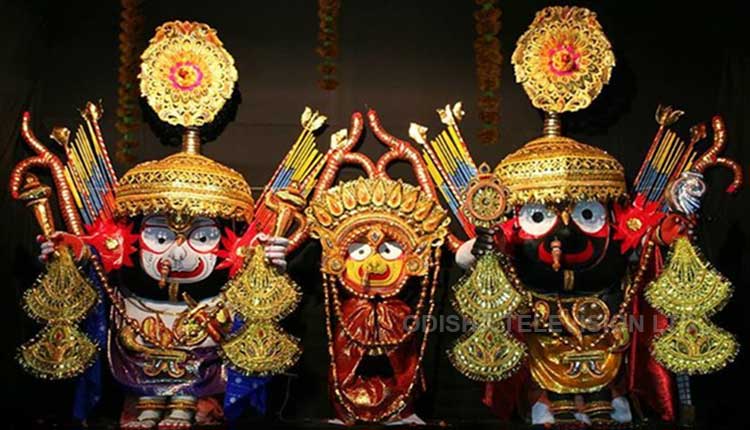 Puri: In a once in human-generation spectacle, Friday morning Lord Jagannath and sibling deity Lord Balabhadra were adorned with the Nagarjuna Besha attire, which is a military general form, after a hiatus of 26 years. This time, however, rituals were performed only in presence of servitors and temple officials due to Covid-induced restrictions.

Such rare and much-awaited Besha takes place only in those years which are marked with six days of ‘Panchaka’ instead of five in the holy month of Kartika. On the 6th Panchaka day, Lord Balabhadra and Lord Jagannath are dressed like Nagarjuna or a Naga Warrior form. The last time Nagarjuna Besha was solemnized was on November 16, 1994.

On this occasion, Lord Jagannath and Lord Balabhadra are dressed up with 16 different traditional arm and armours. Both the sibling deities wear ‘Handia’ on their head, a traditional crown made out of solapith and wooden twigs. The divine idols are decked up with major armours like ‘Dhenu’, ‘Singa’, ‘Tunira’ or arrows, ‘Bagha Nakha’ or tiger nails, ‘Khanda’ or sword.

At around 2 AM, puja of the arms and armours were performed at the house of Chakrakot Khuntia where they were carved. The armours were venerated with a special puja called ‘Varuna Puja’ and then ‘Pushpanjali’ was conducted in a closed chamber. The armours were then brought into the Srimandir in a mega procession with symphony vibes of gongs, bells and clarinets.

During the procession, Puri residents and other devotees lit earthen lamps on the roads to welcome the servitors carrying the arms and armours. As Balaram Khuntia along with his co-servitors marched towards Srimandir on the flower-decked road, chants of ‘Jai Jagannath’ reverberated in the air. The procession entered the Puri Srimandir through the ‘Singhdwara’ entrance.

As per the traditional nitis and rituals mentioned in the Srimandir Record-of-Rights, ‘Dwaraphita’, the opening of the entrance door of ‘Garbhagriha’ or sanctum sanctorum of the temple was done at 2.45 AM in presence of five servitor groups – Bhitarachhu Mohapatra, Muduli, Pratihari, Akhaanda Mekap and Palia Mekap.

The costumes of Lord Balabhadra and Lord Jagannath were brought to the ‘Ratna Singhasan’ which is the divine throne of the sibling deities. At 4.45 am, all ‘Nitis’ or the rituals for ‘Nagarjuna Besha’ kicked off.

However, the rare Besha of Lord Jagannath was delayed by almost 3 hours following some dispute between Bhandar Mekap, Khuntia and Singhari over gold ornaments. Reportedly, a controversy also erupted over engagement of more number of servitors for the rituals. The Besha rituals which were scheduled to kick-off at 4:45 AM began at 7 AM after the intervention of administration.

The Lord was finally adorned with the attire at around 10 AM, which marked the conclusion of the Besha.

All the rituals were observed with devotion but without devotees this year as public ‘darshan’ was denied in view of Covid-19 situation. Section 144 has been clamped in Puri keeping in view a possible chance of public gathering to get a glimpse of Lord Patitapabana on this auspicious day.