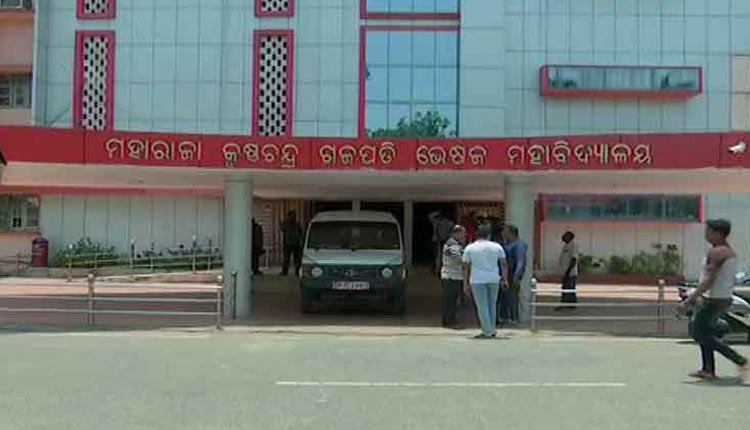 Berhampur: Amid claims of the Ganjam administration that the COVID situation is improving in the district, serious allegations in healthcare delivery mechanism and negligence in the treatment of patients at the MKCG Hospital in Berhampur have come to the fore.

L Mohan Das, Zilla Parishad member of Zone-10 under Kukudakhandi block of Ganjam district, through a video message that has gone viral on social media, alleged that many patients being rushed to the hospital for treatment are losing their lives owing to shortage of oxygen support.

Narrating his own experience, Das said, “After a friend (name not revealed) complained of ill health, I admitted him to the new casualty ward of MKCG Hospital yesterday at around 5 am. As his pulse rate was dropping and he was facing difficulty in breathing, the doctors advised to put him on a ventilator.”

“It was shocking to find out that the hospital did not have enough oxygen cylinders and 4 other patients were already waiting for oxygen support. I saw them dying in front of my eyes. My friend was put on ventilator almost after an hour,” alleged Das in the video message.

Later, Das shifted his friend to a private hospital in Bhubaneswar for further treatment. He has requested the State government, district administration and local authorities to arrange an adequate number of oxygen cylinders to improve the healthcare delivery mechanism at MKCG Hospital.

Senior BJP leader Bhrugu Buxipatra has also claimed of mismanagement at the hospitals. “In case a patient under oxygen support becomes a victim of oxygen shortage at midnight, s/he has to wait for hours (till 10 AM next day) before the cylinder is again refilled because they aren’t provided with an alternate cylinder. It is either due to lack of oxygen cylinders or there is a mismanagement. There aren’t enough doctors available to treat patients requiring emergency treatment.”

However, the district Collector was quick to respond to the allegations saying there is no scarcity of oxygen. “Some people are spreading rumours about it which is false. Oxygen treatment is pure decision of doctors. They are doing their job properly. Don’t demoralise our Covid Warriors,” said Collector in a tweet.

The MKCG Hospital Superintendent, Prof Santosh Kumar Mishra also refuted the allegations and said the hospital has adequate oxygen support. He, however, assured of an enquiry into the allegations levelled by the ZP member.

“The hospital, casualty ward as well as the new Covid-19 isolation centre has adequate oxygen support. Still, an enquiry will be taken up in connection with the incident,” stated Mishra.

It may be noted that most of the patients from the southern districts of Odisha depend on MKCG Hospital for treatment.