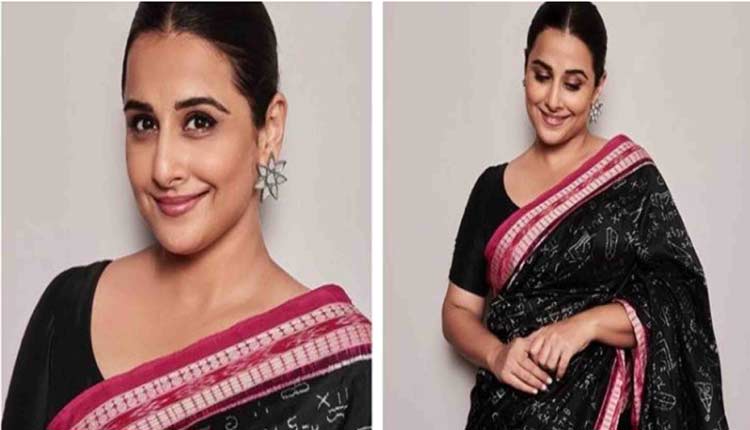 The ‘mathematical equation’ saree which has been leaving the netizens in awe was hand-woven by Odisha Sambalpuri saree artisan Ramakant Meher with mulberry Bangalore silk. It took the Kendupali, Sonepur resident over a period of 1 month to come up with the masterpiece.

Vidya Balan was spotted wearing the specially designed saree on the eve of the release her movie, Shakuntala Devi, based on real-life of Indian mathematical genius on Thursday.

In a video message, the Bollywood actress thanked weavers for the Sambalpuri saree. “It has been a tough time for everybody and I am hopeful that this phase will pass soon,” said Balan.

The ‘mathematical equation’ saree by @utkalamrita is specially woven for the promotion of her upcoming movie #ShakuntalaDevi pic.twitter.com/KI8iXOQNZu

“We have been working to promote Odisha handlooms for last several years. We had got in touch with Vidya Balan’s team during an exhibition in Mumbai last year where we had requested the actress to use Sambalpuri saree for promotion of any of her upcoming films,” said Amrita.

Amrita further informed that it was their dream to ensure that the Sambalpuri saree reaches the actress through their brand Utkalamitra.

“After coming to know that Vidya Balan would be portraying the role of real-life mathematical genius Shakuntala Devi, we again contacted her team in August last year. The saree design had already reached us and we reserved it from the weavers after identifying it as a perfect match with Vidya Balan’s role,” said Amrita.

After sending pictures of the saree, Vidya Balan’s team asked us to contact us in April, 2020. As there was uncertainty over release of the movie due to COVID-19, we contacted her team again in June.

“Now the hard work has paid off when we see the actress praising the saree. It is a dream come true for all of us as we had been pursuing the matter with the actor since last one year,” said Amrita adding that they had reserved the saree from the weavers by paying an amount of Rs 18,000.

As per Amrita, the credit of mathematical equation saree goes to late Bhagwan Meher and Harishankar of Bargarh district. They had produced only four pieces of mathematical saree in 2017 end.

“The weavers had sent 1 piece saree to Kalabhumi museum, reserved another piece for national awards and two others were used for marketing purposes. As the design had already come in the market, many weavers got the design and started replicating it in their looms,” Amrita added.