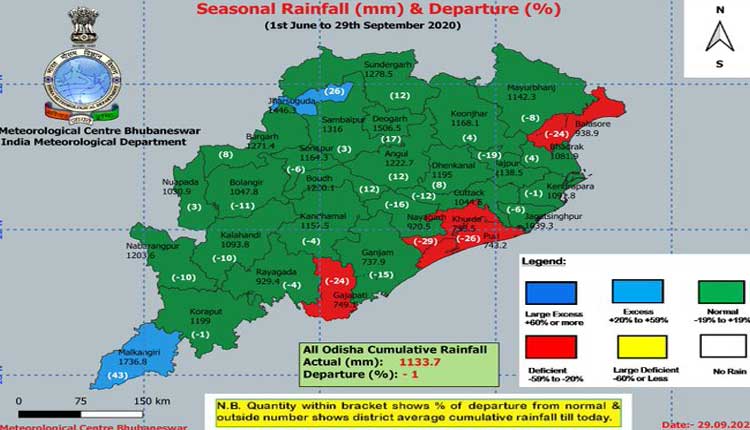 Bhubaneswar: With withdrawal of southwest monsoon from Odisha set to occur in over a week, four districts of the State still continue to reel under deficient rainfall this season. This year, the monsoon winds touched the State on June 11.

As per the IMD’s Regional Centre, Khordha, Puri, Balasore and Gajapati districts in the State have received 788.5 mm, 743 mm, 938. 9 mm and 749.1 mm of rainfall respectively between June 1 and September 29 while the cumulative precipitation deficit in these districts stands at a whopping 29 % in Khordha, 26% in Puri, 24% in Balasore and Gajapati.

If we look at the overall scenario, Odisha has received actual cumulative rainfall of 1133.7 mm of rainfall since the onset of monsoon this year making its seasonal catch at 1 % deficit.

“In view of the establishment of an anti-cyclonic circulation in the lower tropospheric levels over western parts of northwest India and substantial reduction in moisture content &rainfall, the southwest monsoon has withdrawn from some parts of west Rajasthan and Punjab on September 28 (yesterday) against its normal date of September 17,” IMD’s statement read.

Seasonal district average cumulative #rainfall along with #percentage departure from normal (mentioned within bracket) (till today, #29thSeptember 2020) over the districts of Odisha. Color represents the category in which the percentage in departure falls. pic.twitter.com/mtiRueKNTe

Two districts in Odisha have received excess rainfall- Malkangiri and Jharsuguda between June 1 and September 29. Malkangiri district so far has received highest rainfall of 1736. 8 mm (43 % excess) and Jharsuguda district 1446. 3mm (excess of 26 %).

The IMD on Monday informed that the monsoon has begun to retreat from some parts of west Rajasthan and Punjab.