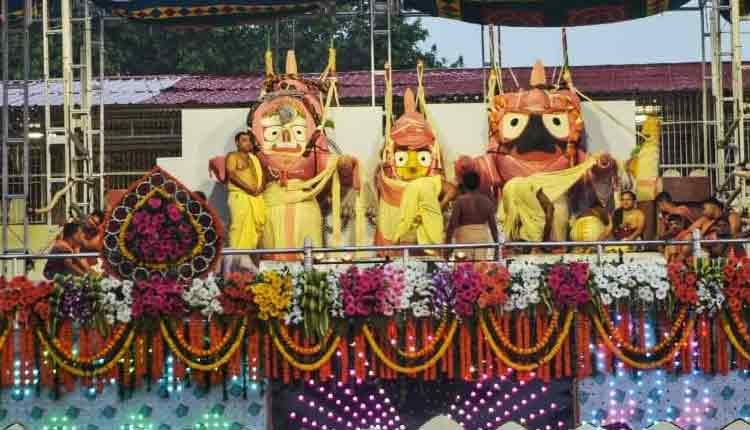 Puri: Millions of people across the globe are now glued to their television sets to witness the royal bathing ceremony of the Holy Trinity of Lord Balabhadra, Goddess Subhadra and Lord Jagannath along with Lord Sudarsan on the occasion of Deba Snana Purnima on Friday.

As for the first time in the history, devotees are not being allowed to witness the Snana Purnima rituals in Puri owing to the restrictions put in place to contain the spread of COVID-19.

Special arrangements for LIVE telecast of the special occasion have been made by Odisha government to ensure that devotees get a glimpse of the deities and their rituals associated with Snana Purnima today.

Spirituality fills Puri Bada Danda on #SnanaPurnima even though it is devoid of usual fanfare & devotees due to restrictions clamped to prevent #Covid19 spread pic.twitter.com/SBnT1d4gu0

Since the wee hours, a string of rituals were undertaken at Puri Jagannath temple for the smooth conduct of Pahandi, the traditional procession of the ‘Chaturdha Murti’.

The holy Trinity were brought one by one by the temple’s Daitapati servitors in the ‘Dhadi Pahandi’ to the ‘Snana Bedi’ or bathing altar.

The servitors got the deities- Lord Balabhadra, Lord Jagannath and Goddess Subhadra ready by invoking them with an Alati and changing their clothes and performing purification rites called Abakasa Niti.

As per the tradition, Holy Trinity will be accorded a bath in 108 pitchers of aromatic water which is a precursor to the Rath Yatra.

Unflinching connection with the omnipresent!

Unable to get a glimpse of Lord Jagannath on a big occasion like #SnanaPurnima due to Sec 144 restrictions amid #COVID19 outbreak, devotees break down while prostrating in devotion of the Lords from the barricades on #Puri Bada Danda pic.twitter.com/FJCxxbWYCz