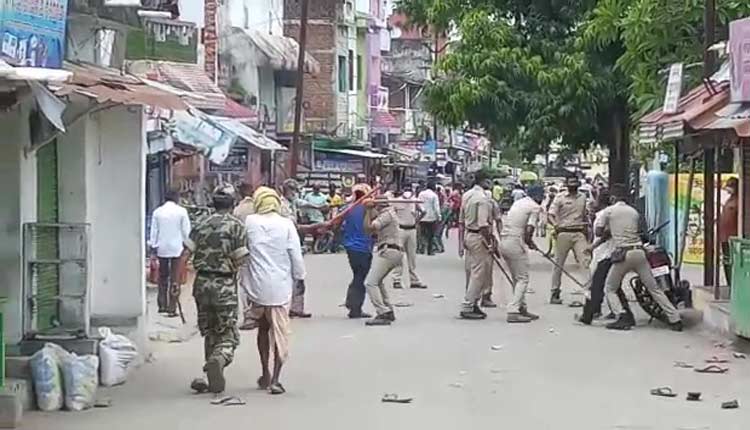 Berhampur: Tension prevailed at Kolidaspur village after police resorted to lathi-charge to disperse locals who were staging a demonstration in front of Hinjili police station on Sunday.

The agitators had gheraoed the police station protesting the detention of 10 villagers who were picked by cops in connection with the torching of vehicles engaged in sand mining in the area yesterday.

The villagers gheraoed the police station on Sunday while demanding immediate release of the detainees. As per reports, nearly eight vehicles including three trucks were set on fire by unidentified miscreants on Friday night.

Sources said resentment was brewing among locals allegedly over rampant illegal sand mining in the region. Despite repeated complaints, no step was allegedly taken by the local administration to put a check on such illegal activities.

“Without having a second thought, the police resorted to baton charge on the public who were protesting against illegal sand mining in the area,” Baxipatra said during a presser.

“Illicit sand mining cases are rising in several parts of Odisha and the administration deliberately allowed land mafias to loot the state’s resources. But when locals took to street against such acts, police acted inhumanly on general public,” added Baxipatra.

On the other hand, Ganjam collector in a telephonic interview said, “We have sent special team to the spot. We will not allow such illegal sand excavations in the district and we will ensure strict actions against who are involved in this.”