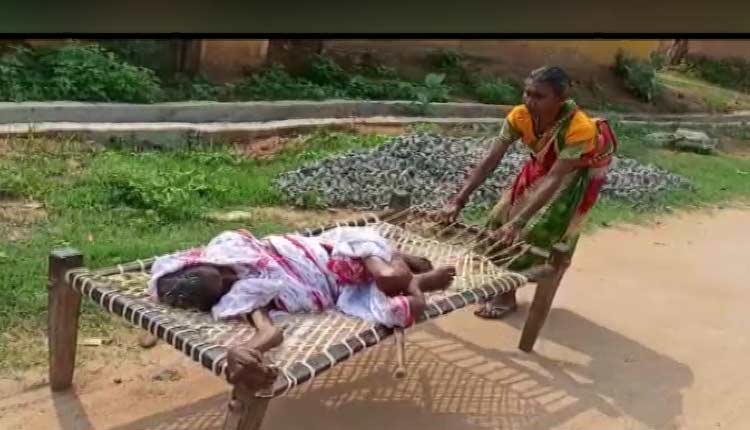 Nuapada: Odisha government on Monday suspended the manager of the Utkal Grameen Bank’s Bargaon branch in Nuapada after video of a bed-ridden woman being taken on a cot to the bank to withdraw money from Jan Dhan Account went viral on social media. The incident was reported on June 10.

With emphasis being given to protect the ‘vulnerable groups’ from COVID-19 by asking them to stay indoors as far as possible, the incident that speaks volumes about the ‘insensitiveness’ on part of the concerned bank official had triggered an outrage.

Quinmati Sika, the daughter of the elderly woman Labhe Baghel (80) had alleged that despite making requests to the bank official Ajit Kumar Pradhan that her mother could not come to the bank for physical verification required for withdrawal of money from Jan Dhan account, her requests were turned down.

With no other option, she took her mother to the bank by lugging her on a cot, said Quinmati.

“When I first visited bank, they told me to come next day and later I was asked to bring the mother for a thumb impression. As there are no other members in family, I took my mother to the bank on a cot,” said Quinmati.

Burden of apathy lugged on road!

Bed-ridden woman lugged on a cot to the bank to withdraw money from Jan Dhan account in #Odisha; bank manager said they had plans to visit her house, but there was a delay pic.twitter.com/5nhd0u51yP

In a statement, Utkal Grameen Bank informed that the elderly woman’s daughter had come to the Bargaon branch on June 9 to withdraw money from her mother’s account by putting her own thumb impression. After knowing that the account holder is bed-ridden, the bank manager had assured to visit their house to facilitate payment. But as it was a single officer branch, the manager could not visit their house due to rush in the bank and assured to pay a visit on June 10.

“The branch manager did not have any intention to harass anybody. But the unfortunate developments led to a communication gap resulting in display of inhuman and insensitive approach by the bank in treating senior citizens. A departmental action is being initiated against the erring official,” Utkal Grameen Bank’s statement read.