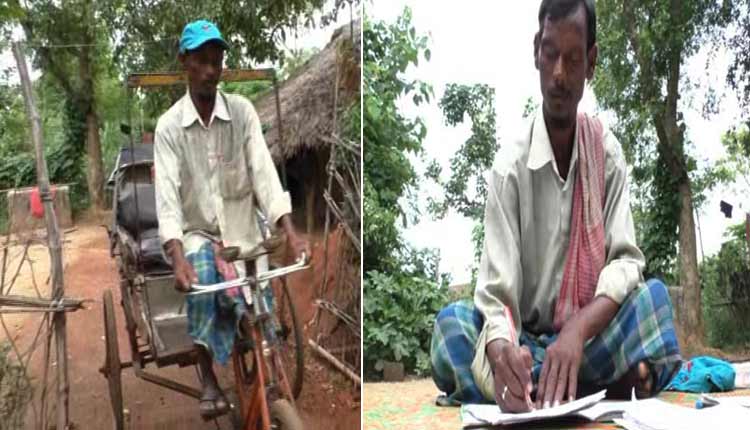 Jajpur: Education helps a person achieve the desired goals and feats but that does not mean that somebody who is deprived of education cannot excel in life. Such is the story of a cycle rickshaw puller in Odisha.

Kailash Patra, a resident of Korabandi village under Korei block in Jajpur district is a local celebrity. Fondly addressed as Rickshwala Kabi, Kailash is known for his passion for writing and reciting revolutionary poems.

Kailash says he had to leave studies when he was in Class 9 due to family hardships but he could not give up his habit of writing. He has been penning poetries ever since.

“I cycle rickshaw during the day and whatever comes to my mind the entire day, I pen them down in the night after everyone retires to bed,” says an amused Kailash.

His wife Pabani who has been very supportive towards him throughout his life says, “His poetry is his recognition because without it, he would only be known as a simple rickshaw puller.”

Kailash has appeared in many literary programmes in Jajpur district as well as several places outside the State. He has also recited his writings in programmes of Akashvani and Doordarshan.

Though he wants to publish an anthology of his writings, financial instability has been a hindrance for him who still continues to live hand-to-mouth despite earning some recognition. However, he has released a book containing his poems with the help of some of his well-wishers.

His acquaintances and locals say that Kailash has the passion and determination to contribute a lot towards the literature of Odisha but financial constraints have been pulling him down so a little helping hand can turn the wheels of success for him.

A local resident of Korabandi, Sukarna Rout said, “Despite being poor who ekes out his living by pulling a rickshaw, he is very passionate about writing poems. He is the pride of our village.”

Poet Alekh Maharana who knows Kailash for the past few years says, “As far as I know him, his only passion is writing poems. While cycling rickshaw if he comes to any new thought or idea, he immediately stops there and notes it down in his notebook.”

Divyang Odisha Man Lights The Way For Other Disabled