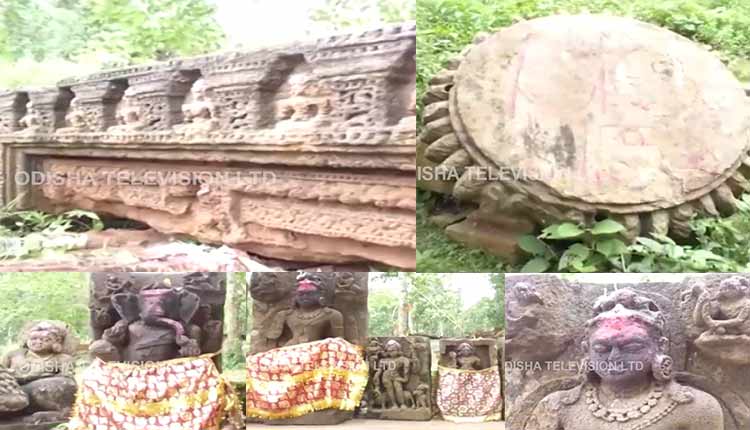 Nayagarh: Deep in the woods of Sankhajodi forest reserve under Ranpur Division in Nayagarh, remains of a temple which is a reminiscent of Shaiva tradition with rich history and architecture of ancient Odisha has now come to limelight.

No one knows much about its history of inception, but folklore says ‘Gangeswar’ temple dedicated to Lord Shiva was built during the period of Ganga Dynasty but was later desecrated by ‘Kalapahad’ in the 13th Century.

Even though there are no official facts and findings pertaining to the ancient structure, remnants of the site where locals have been worshipping since time immemorial believe that the temple ‘Gangeswar’ came into existence during the rule of Ganga dynasty.

A local priest who worships the deities says,” I have been listening to the legends of the site since my childhood. People say it was built in the ‘Treta Yuga’. We have been preserving the remnants and artifacts for decades”.

As per local folklore, the shrine was built during the period of Ganga dynasty in 6th-century, but later desecrated by ‘Kala Pahada’ in 13th-century pic.twitter.com/LYXr2yILRm

“We have been witnessing this temple since our childhood. Our ancestors also did not know about the temple in detail. As part of oral history, the ‘Gangeswar’ holds major significance in our tradition. We come here and offer prayers to Lord Shiva,” mentions a local resident.

Another local narrates that the Shiva temple was built by Ganga rulers but Muslim invader ‘Kalapahad’ during his crusade came here in the 13th Century and destroyed the temple.

“People say the temple has mentions in ‘Madala Panji’. Now the remnants of the erstwhile gigantic structure lie here without any restoration by the government. People outside this area do not know about it because there is no medium of communication to reach” he added.

“Lord Gangeswar is the most ancient deity in Ranpur. People give highest regard to the lord in local festivals. There is a popular belief that King Chodagangadev of Ganga dynasty built this but archaeologists say this temple was built in the 6th century and contemporary to the ‘Swapnewar’ temple in Banpur area of Khurda.” another local added.