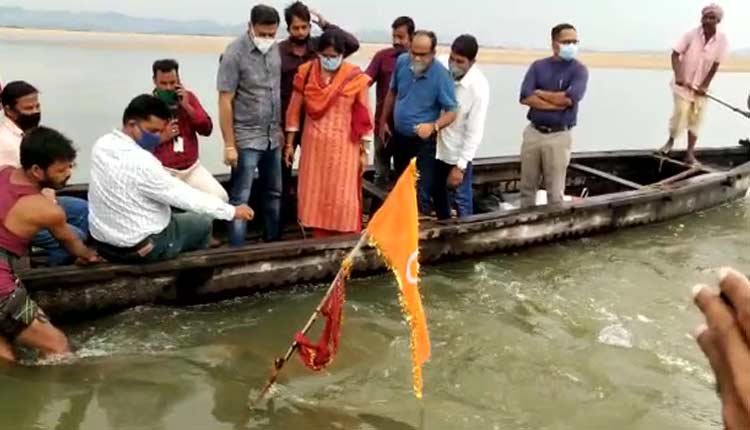 Bhubaneswar: An expert team comprising members of IIT Bhubaneswar and two archaeologists from Rohilakhand University, Uttar Pradesh today visited Nayagarh district where an ancient temple, which had been submerged in the waters of Mahanadi River, resurfaced again recently.

Archaeologist Arup Ranjan Mishra informed that a detailed documentation and research will be conducted on several aspects including when the temple was established and when it got submerged.

“As it is being said that the temple is 60 to 70 ft high, we have to understand what was the activity and energy of the river that its sediments buried the temple,” said Mishra.

Earlier, a survey team of Indian National Trust for Art and Cultural Heritage (INTACH) located the temple in Mahanadi waters near Padmabati village under Bhapur block of Nayagarh.

Archaeologists believe the 60-feet temple which belong to Lord Gopinath, an incarnation of Lord Vishnu, dates back to late 15th or early 16th century, considering the ‘mastaka’ (top portion) of the shrine and materials used in the construction of the temple. The top of the Gopinath Dev Temple was reportedly last seen some 11 years ago and it re-appeared due to the reduction in the water-level of Mahanadi River in the area recently, said reports.

A village named Padmabati was located on the site. After, Mahanadi River changed its course after 1933 flood, the village was submerged under the waters and the villagers moved to higher places to set up a new village, experts claimed.

Khandapada King Bibhuti Bhusan Singh Mardaraj said that a lot of temples were constructed during the reign of the first king Jadunath Maharaj. The place Padmabati suggests it may have been named after some queen. Moreover, the area was a hub for trade and acted as a link with Western Odisha, he said.

“During the tough times of COVID-19, God is trying to give us some message and it is one of his ‘leelas.’ Some say that the temple is 300 years old and some say it is 500 years old. ASI survey should be conducted which will bring more details and information about the temple,” said the Khandapada King.