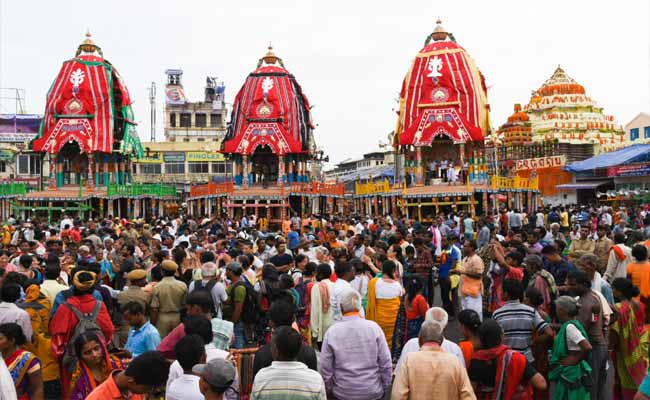 Puri: Amidst uncertainty over organising the annual Rath Yatra of Lord Jagannath in Puri, the Srimandir Managing Committee today unanimously decided to commence the construction of chariots of the Holy Trinity from tomorrow for the forthcoming car festival.

The decision was taken at a meeting of the temple managing committee which was attended by Puri Gajapati Maharaja Dibyasingha Deb and other stakeholders.

Speaking to media after the meeting, the Puri King said, “Chariot construction for Puri Rath Yatra is not a religious function, but a construction activity, which is allowed in all COVID-19 zones, be it green, orange or red. The temple managing committee feels that the construction work can begin, but the final approval will be given by Odisha government.”

“I believe, very soon, may be by tomorrow the State government will intimate us about its final decision on the construction of chariots,” he said.

He further said that no discussion has taken place on Rath Yatra and Snana Yatra during the meeting. “The lockdown guidelines are effective till May 17. Post this period, new guidelines will be issued, and accordingly the managing committee will take a decision on Snana Yatra and Rath Yatra which are scheduled for June.”

Detailing about the meeting, managing committee member Madhab Chandra Puja Panda said all the members opined “now that the government has given permission to undertake all kinds of construction activities, chariot construction can also begin as it will in no way lead to a religious congregation”.

Speaking about guidelines to be followed during chariot construction, he said all carpenters would wear masks while those above the age of 65 will not be allowed. “The district health department will instruct them to take adequate precautionary and sanitisation measures. Besides, Ratha Khala has been expanded to maintain social distancing.”

Ramchandra Das Mohapatra, another member of the managing committee said, “The committee settled on requesting the State government to allow construction of chariots from tomorrow. As construction work has already been delayed by 10-12 days, steps will be taken to expedite the construction work to ensure it finishes on time.”

Earlier in the day, Chhatisa Nijog and Daitapati Nijog of Srimandir wrote to Odisha Chief Minister Naveen Patnaik seeking permission to carry out construction of chariots so that Rath Yatra can be organised.

Daitapati Nijog president & secretary write to #Odisha CM Naveen Patnaik seeking permission to carry out the construction of chariots so that #RathYatra can be organised in compliance with the prescribed guidelines for #COVID19 as #Puri is now a green zone pic.twitter.com/j1blJNq78w