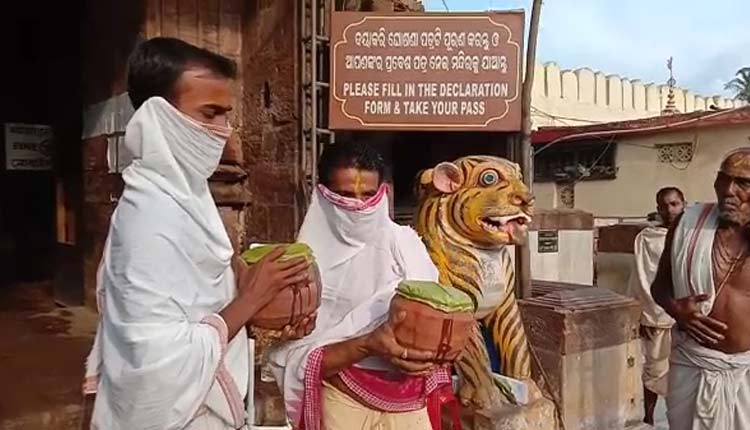 Puri: Lord Jagannath and the sibling deities, who are convalescing in Anasara chamber after falling ill following their symbolic bath during the Debasnana Purnima, received Phuluri Tela (herbal oil) treatment on Wednesday.

As per rituals, ‘Phuluri Tela‘ prepared by Bada Odia mutt is applied to the deities on the fifth-day of their Ansara period today.

The Phuluri oil is made up of myriad aromatic flowers (such as ketaki, malli, boula, champa, kia etc), barks combined with camphor, sandalwood, sesame oil and other ingredients.

Traditionally, the preparation of this special remedy is a 12-month-long process. It is prepared on Hera Panchami — the fifth day after the Rath Yatra every year and kept underground for 12 months before being dug out and carried to the temple in earthen pots for application on the deities.

As per tradition, the Daita servitors, who are in charge of performing all rituals inside the Srimandir till the completion of Rath Yatra, apply the Phuluri oil on the deities. It is believed that the application of the potion helps in faster recuperation.

The Snana Purnima ritual this year was conducted on June 5 without the presence of devotees as Puri district administration had imposed Section 144 on Bada Danda to prevent social gathering in view of the Covid-19 pandemic.

While Rath Yatra of Lord Jagannath is scheduled to be held on June 23, a final decision on the same will be taken by the State Government after assessment of the Covid-19 situation in Odisha.

Earlier on Tuesday, the Orissa High Court, while hearing a petition, decided not to interfere in the conduct of the annual sojourn of the holy trinity and left it to the State Government to take a decision in the matter.

With the car festival of the three deities inching closer, the Maharana servitors have expedited the construction of chariots while the Rupakar and Chitrakar servitors have stepped up the beautification work of the chariots.