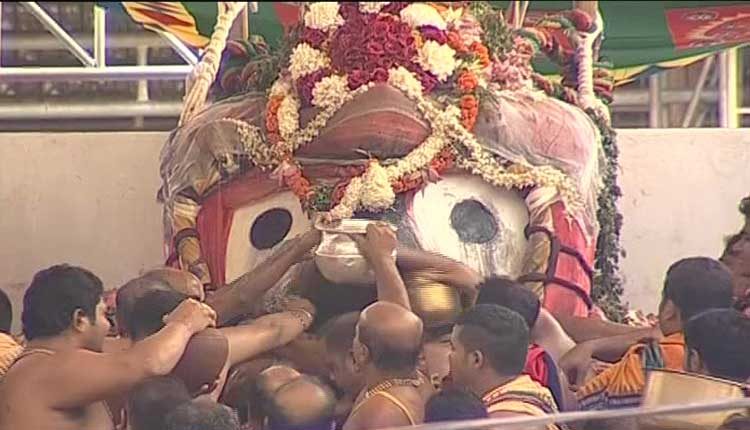 Puri: The Shree Jagannath Temple Administration ( SJTA ) on Wednesday announced the finalised timings of the rituals to be performed during the Snana Yatra -the ceremonial bathing of the holy Trinity before Rath Yatra.

The Snana Purnima of Lord Jagannath, Devi Subhadra and Lord Balabhadra will be held on June 5.

After a meeting of with the Chhatisa Nijog (servitor body), SJTA chief administrator, Krishan Kumar said that a list of minimum number of servitors required for Snana Yatra has been sought from the Nijog.

“After receiving the details, a final decision will be taken at the temple managing committee meeting scheduled be held on May 30,” said Kumar adding that the rituals will be carried out adhering to the social distancing norms.

Timings of the Snana Purnima Ritual:

Meanwhile, Covid test of Garabadu servitors who will be engaged in conduct of the Snana Purima rituals began today.

Swab samples of as many as 75 servitors were collected on the first day. The district administration has set a target to conduct COVID test of 150 servitors.

What After Sanan Yatra?

After the Snana Yatra, the deities will fall ill and remain in isolation, Anasara, for 14 days to recuperate.

During these 14 days of Anasara, the deities will be offered a diet of fruits and treated by the Raj Vaidya, the temple physicians.

After the 14-day of Anasara, the Holy Trinity will reappear in youthful vigour a day prior to the Rath Yatra, which is scheduled to be held this year on June 23.