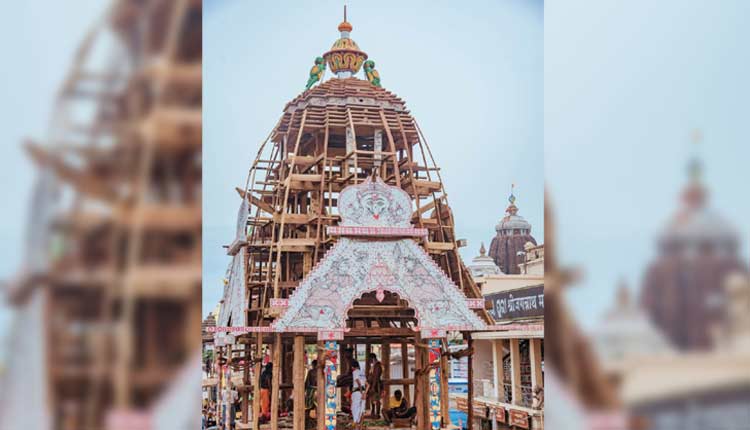 Puri: Will elephants or machines be roped in to pull the chariots of the Holy Trinity during Puri Rath Yatra if devotees are not allowed to participate in the annual event in view of the COVID-19 pandemic? Such pertinent questions are creating turbulence in the minds of millions of devotees as the State government is yet to come out with a clarification whether the Rath Yatra will be conducted or not and if held, in what scale.

Amidst the uncertainty, the Puri Srimandir Purohit (priest) has got permission for ‘Rath Pratistha’, one of the major rituals of Puri Rath Yatra. The Shree Jagannath Temple priest Sidheswar Mohapatra firmly believes that despite the COVID-19 pandemic, chariots should roll on Badadanda, the grand road in the pilgrim town of Puri.

“No work has stopped. The State government should come up with an announcement as everybody is waiting anxiously. We want chariots to roll on Badadanda,” said Mohapatra.

Jagannath Swain Mohapatra, the badagrahi (one of the chief servitors) of Lord Jagannath, on the other hand, today stated that cancellation of Puri Rath Yatra will be bad both for the devotees as well as the State government and it will go down as a black day in the pages of the history.

“Rath Yatra should be organised as it will be a black day in the chapter of history if the rituals are stopped. Through television, millions of devotees have been witnessing the grand festival of the Lord,” said Mohapatra.

It is pertinent to mention here that Orissa High Court had recently thrown the ball in Odisha government’s court asking the latter to take a decision regarding the conduct of Rath Yatra. The High Court had also asked the State government to consider deploying heavy machinery or elephants to pull the chariots during Rath Yatra to prevent the gathering of hundreds of people during the Covid-19 pandemic.

Commenting on the matter, Mukti Mandap Pandit Sabha’s vice-president, Ashok Mohapatra said, “The use of elephants is practically impossible and there is no need to deploy machinery to pull the chariots. The State government should deploy 20,000 to 30,000 police personnel for pulling the chariots.”

Ashok Mohapatra further stated that earlier, the Snana Purnima ritual was observed and there was no congregation. “People of Puri want Lord Jagannath’s tradition should be kept alive,” he added.

Meanwhile, the delay in a clear direction from the State government regarding the Rath Yatra has irked the Opposition.

Congress MLA Suresh Routray said, “CM’s private secretary VK Pandian had recently claimed that Naveen Patnaik is Lord Jagannath’s devotee no.1. All the servitors have openly said that Rath Yatra should be held and the State government should come up with an announcement in the next couple of days.”

Responding to the Opposition, senior ruling-BJD leader, Debi Prasad Mishra said, “Odisha government is taking necessary steps by analysing all aspects as it is a very sensitive issue. The opposition is raking up such issue unnecessarily.”

Also Read: Rath Yatra: Chariot Works In Puri To Be Finished In Next 3 Days