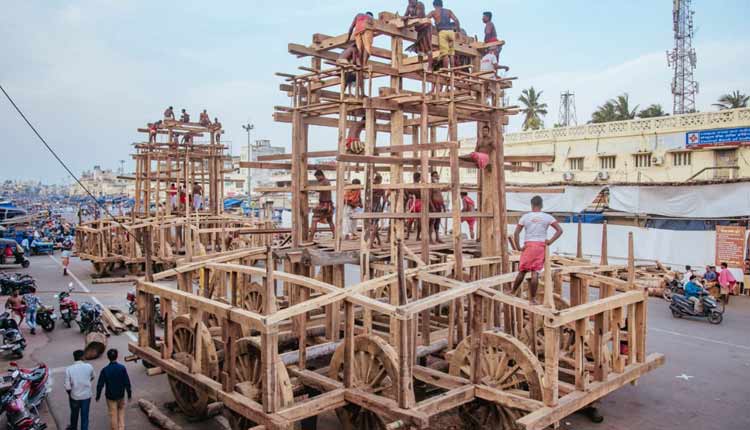 Cuttack: The Orissa High Court has directed the state government that in case it decides to hold Rath Yatra festival at Puri in consistent with the Covid-19 guidelines, then it must also duly consider deploying machinery or other means like elephants to pull the chariots.

The three heavily built wooden chariots of Lord Jagannath, Lord Balabhadra and Devi Subhadra are traditionally pulled manually over a distance of three kilometres twice during the nine-day festival of the Trinity at Puri. The Ratha Yatra is scheduled to be held on June 23.

A Division Bench comprising Chief Justice Mohammad Rafiq and Justice Biswajit Mohanty, while disposing of two PIL writ petitions in this regard earlier this week, has made this observation.

“We are inclined to observe that deploying heavy-duty machinery or any other means like elephants, than the men power for pulling the chariots, would obviously obviate the necessity of involving large number of persons, which number could be in many hundreds”, the high court observed in its June 9 order.

According to reports, the state government is likely to take a call next week on holding of the Rath Yatra festival at Puri. While the festival is scheduled on June 23, the Bahuda Yatra (return car festival) is fixed for July 1.

Advocate General Ashok Parija had informed the court that the government is fully aware and monitoring the deteriorating coronavirus situation in the state and Rath Yatra decision will be taken on the basis of objective evaluation of the ground situation at an appropriate time.

Not issuing any writ mandamus as prayed by the petitioners, the high court was inclined to hold that it is up to the state government to decide whether or not to allow the religious festival depending on the Coronavirus situation prevalent on the ground.

If however, any such decision is eventually taken, the state government shall ensure strict adherence to the directives issued by the Centre and the States own orders containing additional guidelines, the high court said in its 17-page order.