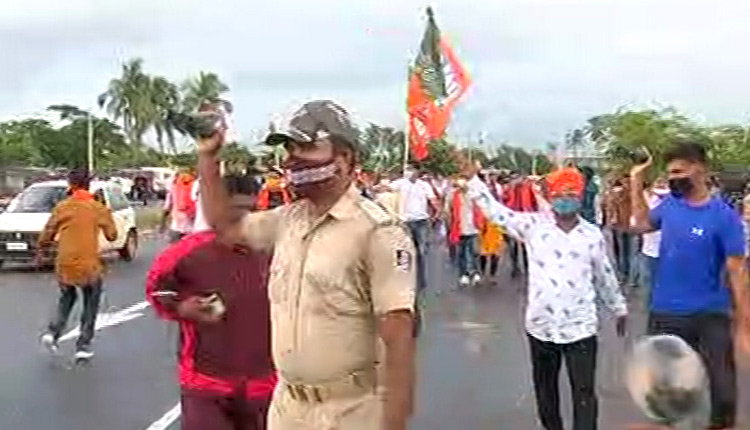 Bhubaneswar: The row over Puri Bagala Dharmashala land continues to intensify with agitating Bharatiya Janata Party (BJP) workers launching a Padyatra that ended in a violent scuffle with Police.

Hundreds of Commissionerate Police personnel stopped the BJP workers heading towards CM Naveen Patnaik’s residence on the outskirts of Bhubaneswar at Uttara Square resulting in a clash.

According to sources, several BJP workers were taken into preventive custody in the process.

The Padyatra was kicked off on Wednesday from Puri to Bhubaneswar. The agitating BJP workers had launched the Padyatra to meet CM Naveen Patnaik at his residence and submit a memorandum regarding the alleged irregularities in sale of the Bagala Dharmashala land.

However, a scuffle ensued at Uttara Square after the police stopped them from marching ahead.

Accusing the government of maintaining double standards, a member of the saffron party said, “The police stopped us by citing COVID19 guidelines. But I want to ask, where were the guidelines when BJD leaders were blatantly flouting them at the funeral of late Pipili MLA, Pradeep Maharathy?”

Later, the delegation handed over the memorandum to the DCP, who reportedly assured to submit it to the Chief Minister.

Speaking to OTV, BJP’s Puri MLA, Jayant Sarangi said, “We have been on Dharna for 27 days and the government is still sleeping. Puri is a religious place and we have come here to save the Bagala Dharmashala land from being sold to private entities.”

BJP MLA from Brahmagiri Constituency, Lalitendu Bidyadhar Mohapatra who accompanied Jayant Sarangi in the Padyatra said, “We were forced to launch the Padyatra because neither the district administration nor the State government paid heed to our demands.”

BJD’s Padyatra An Attempt To Cover Up COVID19 Mismanagement In Odisha: Opposition