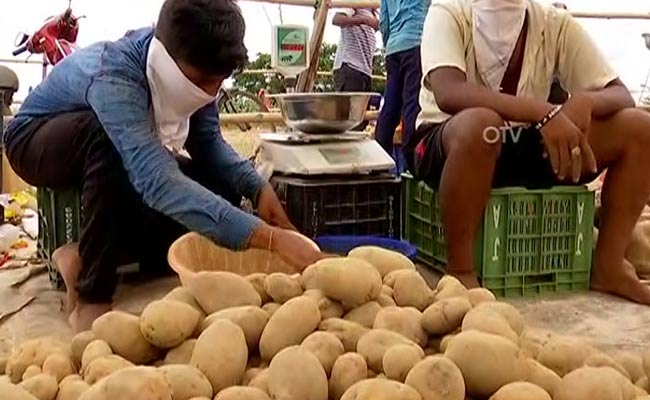 Cuttack: As the super cyclonic storm Amphan inches closer to Odisha coast, potato and onion prices have skyrocketed in different parts of the state including Cuttack and Bhubaneswar with people resorting to panic buying.

Though vegetable rates remained unchanged, prices of potato and onion have increased between 20% and 40% per kilogram.

According to market sources, potatoes and onions were being sold at Rs 18 to Rs 20 per kg a few days back, but now their prices have shot up to Rs 25 and Rs 27 per kg, respectively.

It is believed that as cyclone Amphan is inching closer to Odisha, retail traders are buying lesser stock. Moreover, there are allegations that some traders have resorted to black marketing and artificially increasing the rates of essential commodities.

Following complaints over elevated prices of potatoes & onions, officials of Supply department today raided the makeshift market at Unit-1 High School ground in Bhubaneswar and regulated the price. Meanwhile, potato is being sold at Rs 22 per kg and onion at Rs 20 in the market.

Debendra Nath Sahu, secretary of Chhatra Bazaar Trader Association in Cuttack said, “Everybody is scared because of Cyclone Amphan and no one knows its impact on the State. Huge quantities of potato are imported from West Bengal, where prices have increased considerably too.”

Retail prices of potato at Chhatra Bazaar is Rs 70 per three kilograms, but retailers who have been shifted to other places of Cuttack city are selling it at a higher rate after charging for additional cost of transportation, added Sahu.

The local markets in Odisha are not sufficient to meet the demand of potatoes in the State. If cyclone brings any damage in West Bengal and the supply is disrupted, the rates will ultimately go up, informed Sahu.

Chhitaranjan Giri, a consumer in Cuttack said, “Potato was being sold at Rs 60 per three kilograms a few days back and now the rates have been increased to Rs 70 to Rs 80. Though the prices of vegetables have remained the same, potato prices have increased sharply.”

Allaying fears of shortage of essential commodities in the State, Food Supplies & Consumer Welfare Minister, Ranendra Pratap Swain tweeted, “I request people not to believe any rumours regarding Cyclone Amphan. There is no need for panic buying and do not be afraid. Strict action will be taken against those who are found selling commodities at increased rates.”

Why some companies will fail on work-from-home transition