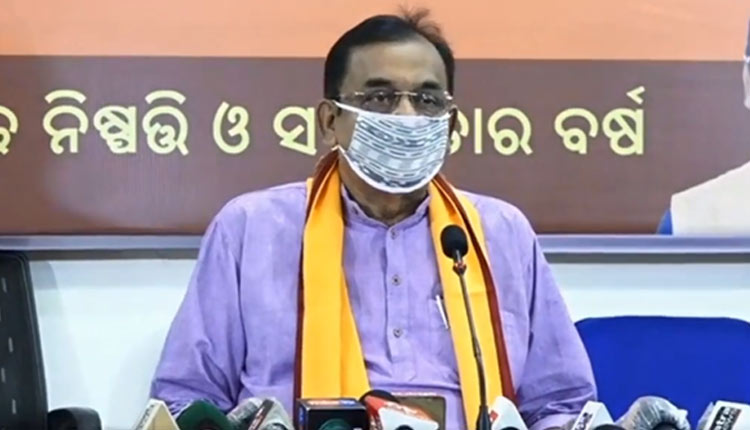 Bhubaneswar: The Odisha unit of Bharatiya Janata Party (BJP) on Tuesday claimed that around 80 crore of Indians including at least 3.24 crore people of Odisha will be benefitted under Pradhan Mantri Gareeb Kalyan Ann Yojana.

Highlighting the benefits of the food security scheme, State BJP President Samir Mohanty said, “Around 80 crore people of India will be benefitted with the scheme and the Central government will incur an expenditure of Rs 90,000 crore to provide free food grains to the people.”

“Farmers, workers and people from poor section will get 5 kg rice or wheat and 1 kg pulses per month till November. The scheme will act as a boon for the people of Odisha. As many as 3,24,00,370 people of 92,98,582 families of the State will be covered under the scheme, added Mohanty.

The yojana, considered as world’s largest food security scheme aims at ensuring sufficient food to the poor and needy amid the coronavirus pandemic. Though it was initially rolled out for a period of three months from April following enforcement of lockdown, it was later extended to five more months till November end.

Mohanty further stated that PM Narendra Modi has directed all the state governments to ensure provision of the benefits of the scheme even to people who do not have ration cards.

“Of the selected 116 districts across the country, four districts of Odisha- Ganjam, Balasore, Bhadrak and Bolangir have been included in Garib Kalyan Rojgar Abhiyaan. The initiative will help creating jobs for lakhs of migrant workers who had returned to the State after the nation-wide lockdown in March, said the BJP State President.

The 125-day programme will work on mission mode and involve focused implementation of 25 categories of works/ activities in the selected 116 districts.

The State BJP chief also thanked PM Modi to come up with the scheme prepared in the interest of the migrant labourers and poor section of the society and urged Odisha government to ensure the facilities reach people smoothly.