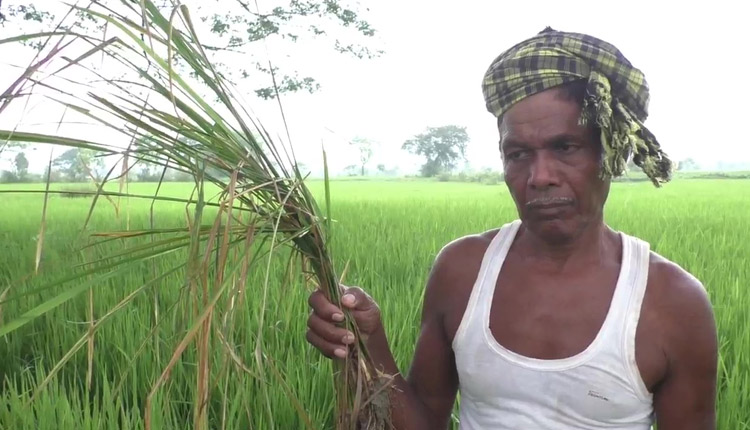 Berhampur: After bearing the brunt of Covid-19 crisis, pest attack on standing paddy crops has emerged to be a cause of huge concern for farmers in Ganjam district.

As per reports, caseworms (Nali Poka or Patrakhia Poka) have damaged major portion of standing crops which were in growing stage in Pratappur, Kudutai, Gereda and some other panchayats under the Jagannathprasad block of the district.

Farmers suffering the pest attack say that the moth feasts by scraping leaf tissues or biting through leaf sheaths turning their green colour to yellow ultimately leaving the crops waste.

The affected farmers alleged as they were not provided pesticides and other chemicals at the right time by the concerned agriculture authorities due to which they are facing the pest attack now.

A farmer of Burapalli village under Pratappur panchayat of the block, Harihar Nayak said, “After facing numerous problems due to Covid-10 lockdown and lack of labourers, we cultivated paddy. However, due to availability of sufficient pesticide in the co-operative society, our crops are being eaten up by pests. We are afraid how to repay the loan as the yield this year will be considerably less.”

“We are suffering massive losses but the concerned administration is yet to reach us with any measures,” alleged another farmer of Burapalli, Shanti Gouda.

Apprised about the situation, the village agriculture worker visited the panchayats to review the scenario and sensitised the affected farmers on use of pesticides and bactericides to save their crops.

“We assessed the situation and found the crops are under caseworm attack. We have advised the affected farmers to use pesticides which will be issued by the government,” said VAW Narendra Kumar Panigrahi