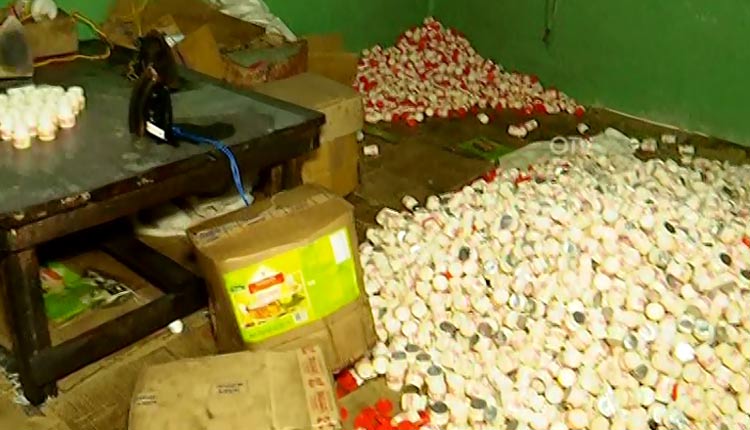 Cuttack: The Silver City of Cuttack is fast turning into a hub of adulterated food processing units with detection of as many as 14 such illegal units in the last two months.

Goods and property worth Rs 4,40,10,000 were seized from the illegal units operating from various places in the city, said deputy commissioner of police (DCP) Prateek Singh on Sunday.

“In the last two months, 14 adulterated food processing units which were running without authorisation have been detected in the city. Those units had been producing ghee, turmeric powder, honey, chilli, spices, sauce and other products by mixing harmful and cancer-causing chemicals,” Singh told OTV.

“Sixteen persons involved in the adulteration activities have been arrested so far and forwarded to the court. Our drive will continue to uncover all those units for the safety of public health,” he added.

Singh said the accused persons manufactured the fake products and packed them using the labels of famous brands in such a way that people fail to recognise the fake products. He urged people to verify products properly and buy the original commodities.

“I request people to come forward and report if they learn about such illegal activities in their vicinity and I assure that we will take action accordingly,” Singh added.

Today, a unit which was allegedly manufacturing adulterated ghee by blending certain oils, soluble powder and various chemicals was unearthed at Sriram Bazaar area in Cuttack.

Yesterday, another illegal unit making contaminated ghee was busted in Nuabazaar area of the city by Chauliaganj police. The Chauliaganj police had also busted a factory allegedly manufacturing adulterated spices like turmeric and chilli powder the same day.

On November 26, Commissionerate Police had busted a fake ghee and edible oil manufacturing unit at Gabagasta under Sadar police limits in Cuttack.

On November 11, an illegal factory allegedly engaged in manufacturing adulterated chili and turmeric powder was busted in Malgodown area in the city.