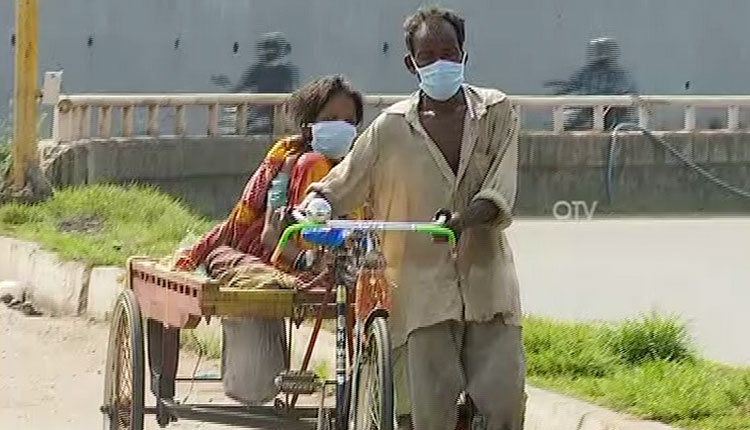 Cuttack: The woman who was brought to SCB Medical College and Hospital here on a trolley rickshaw all the way from Sakhigopal in Puri district by her husband, Kabir Bhoi yesterday, died while undergoing treatment at the hospital today, informed Emergency Medical Officer of SCB Hospital Superintendent Dr Bhubanananda Maharana.

“Soon after the woman (Sukanti) reached the hospital yesterday afternoon, we immediately started her treatment and conducted various tests. Her ultrasound report revealed suspected liver malignancy. However, her health condition deteriorated today morning and she died at around 12.20 PM today,” said Maharana.

Following Sukanti’s demise, Kabir said if he would have brought Sukanti in an ambulance or private vehicle instead of the trolley rickshaw, he would have reached the hospital earlier and saved his wife.

“Despite requesting many people, no one lent me any help and therefore I could not hire an ambulance or auto-rickshaw. Having no other alternative, I brought her to Cuttack on a trolley rickshaw,” said a heartbroken Kabir.

The 70-year-old man identified as a resident of Dasbidyadharpur village near Sakhigopal in Puri district paddled his sick wife for 90 kilometres on a rented trolley rickshaw yesterday after he failed to hire an auto-rickshaw to take her for treatment at SCB Hospital.

Kabir had initially admitted Sukanti at Puri District Headquarters Hospital (DHH). The doctors at the DHH advised him to shift his wife to SCB Hospital in Cuttack as her health condition continued to deteriorate.

Emergency Officer of SCB Medical, Dr Bhubanana Maharana further clarified that the woman died due to stomach cancer. He said, “The woman was old aged because of which her immunity was weak. However, the main reason for her death was stomach cancer. ”

“The patient was not referred to Cuttack medical in the first place. She and her husband initially asked us to discharge as they wanted to go home. After some days they probably planned to go Cuttack. This case will further be investigated,” Puri District Head Qurter Hospital ADMO, Dr Pranab Shankar Das said.

Sarpanch of Dasbidyadharpur Panchayat, Harihar Nanda said, “We were not aware of the condition of his family. We would have definitely done our best had we known or someone would have told me about his family”.

2 Years After Cyclone Horror, Odisha Village Still Struggles To Limp Back To Normalcy