Odisha: Mob Sets Bus On Fire In Kendrapara After It Runs Over Biker 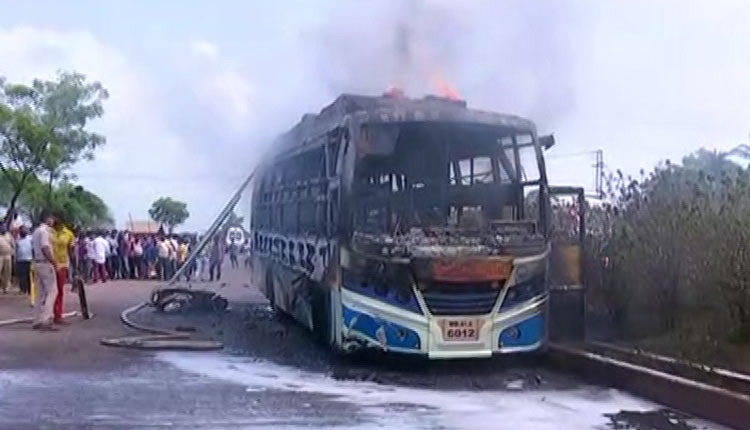 Kendrapara: A group of people set a bus on fire following the death of a youth who was allegedly being hit by the vehicle while driving his way to his home on a bike in Kendrapara district today morning.

The incident reported to have taken place near Radhabhati of Haldiagada of Chandikhol-Paradip National Highway 5 when the bus was on its way to Paradip from Kolkata.

Though the identity of the deceased was not immediately ascertained, it is learnt that he owned a shop at Haldiagada.

#Kendrapara: Irate mob sets bus on fire following death of a biker after being hit by the bus on NH-5 near Haladiapada Radhabhati #Odisha #WATCH pic.twitter.com/Hg75TRgXPT

Angry over the death of the man, the local residents intercepted the bus and asked all the passengers to alight before setting the vehicle on fire. The entire luggage and other items in the bus have been reduced to ashes in the blaze.

Informed, fire fighters rushed to the spot and doused the fire. Mashaghai police also reached the spot and launched a probe into the incident.

“The bus was plying on wrong route due to traffic jam on other route when it hit the youth who was going to Marsaghai for buying grocery items for his shop. He died on the spot. Angry over the death, locals first staged a road blockade and then torched the vehicle,” said a local resident

Marsaghai inspector-in-charge Kalindi Behera said, “The accident took place between 8.45 am and 9 am today when the bus was heading to Paradip from Kolkata. We learnt that a resident of Haldiagada was killed in the accident. When we reached the spot, the bus was on fire. We called in the fire fighters who douse the flames.”

Read More: Bhubaneswar: 4 Of A Family Killed In Road Mishap At Chandrasekharpur