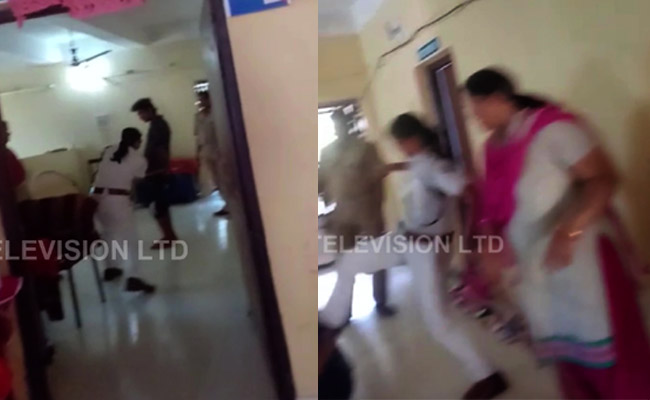 Bhubaneswar: Deliver justice to people and provide people-friendly service in the best possible way – Odisha Chief Minister Naveen Patnaik had directed the State police a couple of years ago. However, allegations of police brutality continue to crop up in the State.

In a recent incident, a lady police officer has been accused of brutally assaulting a youth in custody. In a video, which has now gone viral on various social media platforms, the IIC of Patana Police Station in Keonjhar is seen beating a youth mercilessly over an alleged land dispute.

IIC Sandhyarani Jena is seen kicking and thrashing Raju Mahant with a stick in presence of other police personnel in the Patana PS.
“We had a small dispute during farming on March 25. Police picked us up and kept detained for 25 days,” alleged Mahant.

Meanwhile, Sandhyarani Jena nor the Keonjhar SP could be contacted for comments in connection with the incident.

Earlier on May 7, a woman brought allegations of rape and fraud against a sub-inspector (SI) working under Commissionerate Police in Bhubaneswar. The woman alleged that the SI identified as Rakesh Samal developed an affair with her after befriending her through Facebook. She further alleged that the accused kept physical relations with her on several occasions on the pretext of marriage and defrauded her of Rs 5 lakh.

In another incident, Sub-Inspector Ashutosh Mohanty of Keonjhar Town Police Station was transferred for misbehaving with a video journalist of a private regional channel on April 22. The video journalist was taking his ailing 4-year-old son to Keonjhar district headquarters hospital (DHH) in car when the SI stopped his vehicle and allegedly beat him with a baton. Besides, an SI of Ramachandrapur Police Station was suspended on charges of torturing a person.

COVID-19 Pandemic: Updates From Around The Globe