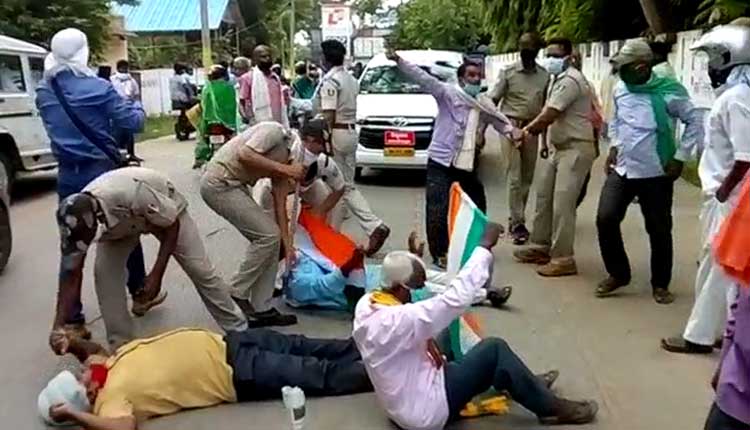 Jagatsinghpur: Lending a unique voice to their plight, farmers of Jagatsinghpur district under the aegis of the Naba Nirman Krishak Sangathan (NNKS) lay down in front of the district Collector’s car on Friday as a mark of protest over their unfulfilled demands.

As per reports, the protesters blocked the district Collector’s path while he was on his way to the Collectorate from his residence. The protestors lay themselves down in front of his car and raised slogans demanding compensation for the crop losses suffered in cyclone Fani last year and heavy rain this year.

Jagatsinghpur SDPO, Priyaranjan Satapathy said, “We have detained eight protestors and action will be initiated against them as per law.”

As per allegations, some of the farmers in the district are yet to receive Cyclone Fani compensation even after one year of the natural calamity. Moreover, the farmers complained that pulses cultivation in the district was damaged by the heavy rain caused by a low pressure this year and authorities are not taking steps to assess the damages.

Swain said, “Despite the fact that the Special Relief Commissioner of Odisha approved compensation for Fani-affected farmers last November, we never actually received the amount from the dist administration.”

“Unseasonal rainfall in March coupled with the outbreak of Coronavirus in Odisha has broken the backbone of farmers. If we aren’t compensated soon enough, we will be forced to intensify our agitation even further,” added Swain.

No comments could be obtained from the concerned officials.

Another Farmer In Odisha Ends Life Over Crop Loss