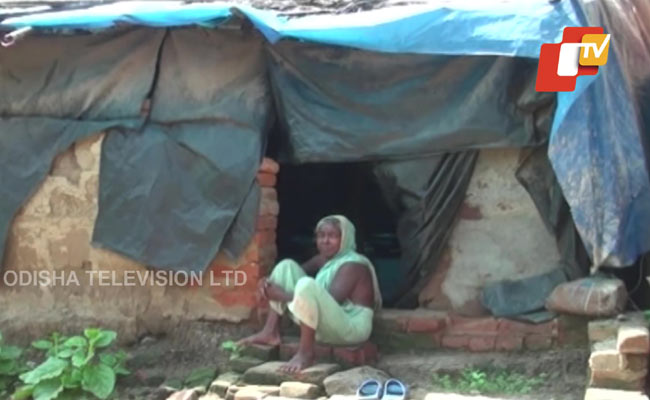 Bhubaneswar: One year has now passed since the extremely severe cyclonic storm ‘Fani’ ravaged several parts of coastal Odisha on May 3, 2019. The memory of devastation caused by Fani is still fresh in the minds of people of Krushnaprasad and Brahmagiri blocks of Puri district as government help still eludes the villagers and they are yet to come to terms with life.

“My entire house collapsed under the impact of strong winds. I had no option other than to reconstruct it with temporary arrangements. Till now, we are facing a lot of difficulties due to lack of a proper roof over our heads,” said Ranga Bhoi, a Fani-hit victim.

Narrating her ordeal, another local resident Maguni Bhoi said, “We had to take shelter in the school building. But when we returned, everything was lost within hours. Since then, we have been staying under a polythene sheet roof as we have no money to reconstruct the house.”

However, Brahmagiri Tehsildar Kishore Kumar Panda stated that a total of 42,000 people were affected by cyclone Fani and following an assessment, full home damage assistance was provided to 10,000 people and compensation was disbursed to the remaining people for partial house damage.

Not only Brahmagiri, Krushnaprasad block in Puri district also witnessed large-scale damage due to the cyclone.
The scars of the devastation of the cyclone are still visible here. The damaged thatched houses have been covered by polythene sheets while the victims are still awaiting assistance as promised by the State government.

No end to sufferings!

One year has passed since cyclone #Fani battered #Odisha on May 3, 2019. Even as govt had promised all types of help & financial assistance, many of the affected people are still reeling under alleged apathy & struggling to get a roof over their heads pic.twitter.com/GhxLYRhIgy

“It’s now one year to the cyclone Fani. The government had then promised to reconstruct our house but nothing has been done so far,” alleged Abhay Tarai, a local resident.

Several families in the cyclone Fani-hit districts are still struggling to recover from the trauma. Though the affected people had hoped that things would change after government help, they are still facing problems in bringing their lives back on track.