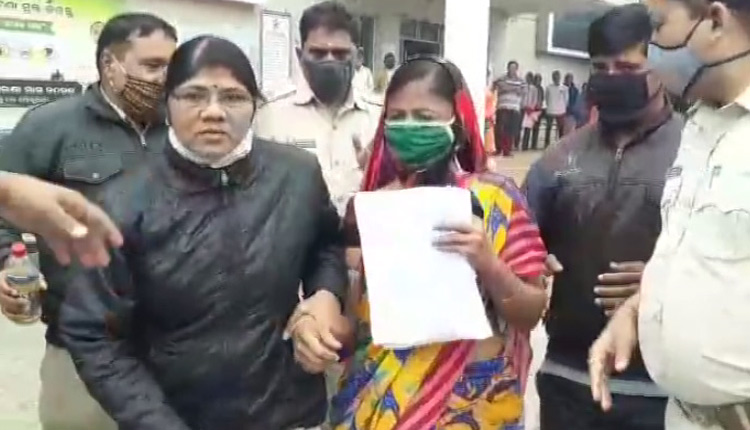 Angul: In a desperate attempt to end life, a woman Monday tried to set herself on fire in front of the Angul Collector office seeking justice in a land dispute case.

The woman Damayanti Behera has been identified as a resident of Gobara village under Bikrampur police limits in Talcher. After her husband passed away in 2014, she was forced to live a life of penury. She has none else to look after her ailing son.

Damayanti alleged that she is being harassed by her brother-in-law over division of their property, citing which she has lodged multiple complaints with the Police and district administration. However, her long-standing complaints have fallen on deaf ears, she alleged.

When a hopeless Damayanti today attempted to immolate herself, she was overpowered and rescued by police personnel present at the spot.

“If there is no one to take a stand for me or extricate me from this situation, I will immolate myself – today or tomorrow. My son will also set himself afire. They illegally occupied our land in the backyard of our house, then demolished Anganabadi, and are now trying to kick us out of the house. Madam (official at the Collectorate) has assured that she will look into the problems. If there’s a further delay, I will surely immolate myself,” said Damayanti Behera, the complainant while being taken into custody.

Dodging the queries, Angul IIC Ramesh Chandra Bisoyi only said that the woman had come to express her grievances with regard to a land dispute case.