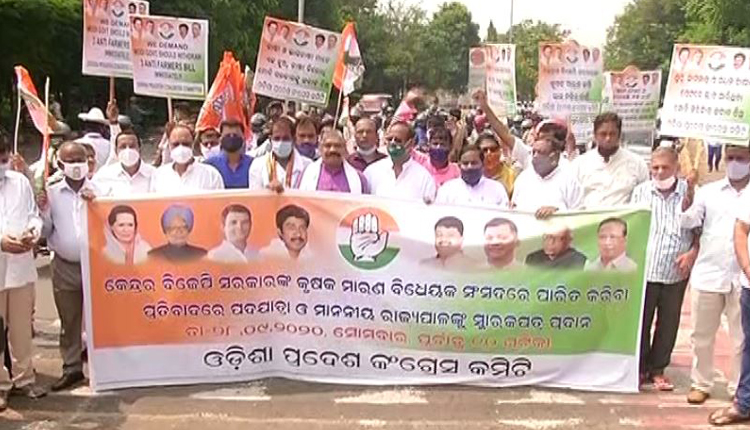 Bhubaneswar: As part of its nationwide movement against the passage of farm bills in the Parliament recently, the Odisha unit of the Congress on Monday staged a massive demonstration in Bhubaneswar.

Several senior leaders of the party including former State PCC president, Jayadev Jena, Sarat Rout, Pradip Majhi and others took out a rally against the ‘anti-farmer policy’ of the Centre.

“The small and marginal farmers have voluntarily joined the protests. We will continue with our protests, till the Centre withdraws the farm bills,” said Jena.

Though the Congress delegation wanted to meet Odisha Governor to submit a memorandum over their demands, they were not allowed. The Congress leaders later expressed their resentment over the issue.

“It is unfortunate that we could not meet the Odisha Governor. It is now evident that both the BJP and BJD are one party. While farmers are committing suicides, the farm bills have been brought only in the interest of industrialists,” said Congress MLA, Tara Prasad Bahinipati.

He further stated that the party will raise the issue in Odisha Assembly. “Today’s demonstration was just a trailer. We will intensify our protests in coming days,” he said.

However, comments could not be obtained from the ruling BJD or the BJP.

See Inside Pictures Of Birthday Lunch Of Ranbir Kapoor, Alia Bhatt Baked Cake For Him