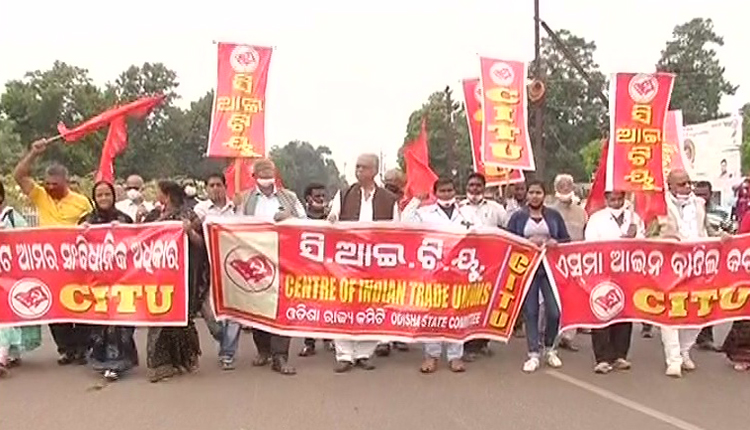 Bhubaneswar: Demanding withdrawal of the Essential Services Maintenance Act (ESMA), members of Centre of Indian Trade Unions (CITU) on Wednesday staged a protest at the Master Canteen area in the Capital city.

Police took hundreds of protestors near lower PMG while they were marching in a bid to gherao the State Legislative Assembly.

Odisha Essential Services Amendment Bill 2020 was passed in the State Assembly on November 23 amid protests from the opposition BJP and Congress legislators.

According to the amended bill, State Government employees engaged in delivery of essential services will now face disciplinary action if they participate in any ‘illegal’ strike.

“We demand immediate withdrawal of ESMA. The workers have the constitutional right of staging protests. Government will come and go, but the workers will remain forever. No government could bar them from their lawful rights,” said CPM leader JanardanPati.

By amending the original act, enacted in 1988, a new provision has also been inserted for imposing penalty against an individual, who spends or supplies money in support of strike, which is ‘illegal’. Such offence has been made punishable with imprisonment for a term which may extend upto one year or with fine which may extend to Rs 5,000 or with both.

“Odisha Essential Services Amendment Bill is anti-constitutional. If it is not withdrawn immediately, we will intensify our protest. We will enter into Assembly and ensure that the legislators frame laws in favour of the workers,” added Pati.