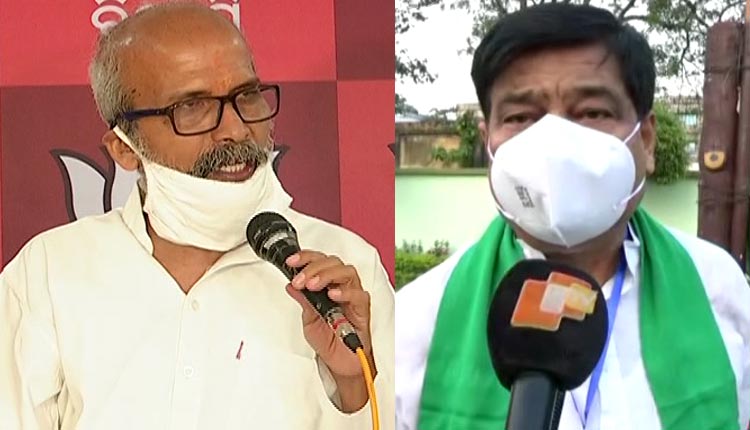 Bhubaneswar: Union Minister & senior BJP leader, Pratap Sarangi on Monday alleged that the Odisha government is trying to divert the attention of people towards the free vaccine issue to hide the misappropriation of funds sanctioned by the Centre for Covid-19 management.

“The BJD is worried after the misappropriation of funds sanctioned by the Centre for treatment of Covid-19 patients has been exposed. Therefore, the party is trying to divert the attention of people towards another issue,” Sarangi said at a presser today.

Reacting to the question of the State minister as to why the BJP is not making free vaccine promise in Odisha, Sarangi said, “The BJP has issued its manifesto because of the Assembly election in Bihar. Why manifesto will be issued for by-elections in Odisha?”

Sarangi said the Centre will provide free vaccine to all the citizens of the country and Rs 550 will be spent on each person. He also raised questions on the agreement of Odisha government with vaccine manufacturer.

Similarly, BJP leader Golak Mohapatra said the Centre has made an estimation of Rs 80,000 crore for providing vaccine to all the citizens in the country.

Speaking on the free vaccine controversy, Odisha Congress chief, Niranjan Patnaik said, “The government provides all types of preventive vaccines to people free of cost, so what is new in this promise. In view of by-elections in Odisha, a State minister has assured that the vaccine will be given free of cost in Odisha too. What promises the government has fulfilled so far?”

Reacting on the mater, ruling-BJD MLA Debi Mishra said, “No one should play politics over vaccine and public health. Naveen Patnaik-led BJD government is first among the states providing free Covid-19 treatment.”

On the other hand, campaigning by the three major political parties are on in full swing in be bypoll-bound Tirtol and Balasore Sadar constituencies.

The star campaigners along with their respective candidates are holding bike rallies and roadside meetings and leaving no stone unturned to woo the voters.

Speaking about the campaign, BJD candidate for Balasore Sadar, Swarup Das said, “The huge gathering of people in our campaign trail is the proof of support to the BJD for its good governance. The gathering indicates that the mandate will go in favour of BJD.”

“The unconditional support provided by PM Modi during the pandemic has won the hearts of the people. It is certain that BJP will emerge victorious in Tirtol,” said BJP candidate, Rajkishore Behera.

The CPM is supporting Congress candidate Himanshu Malik in the Tirtol seat. “CPM has strong organisational base in our area. They are fighting for the rights of farmers. It will certainly prove beneficial to us,” said Mallick.