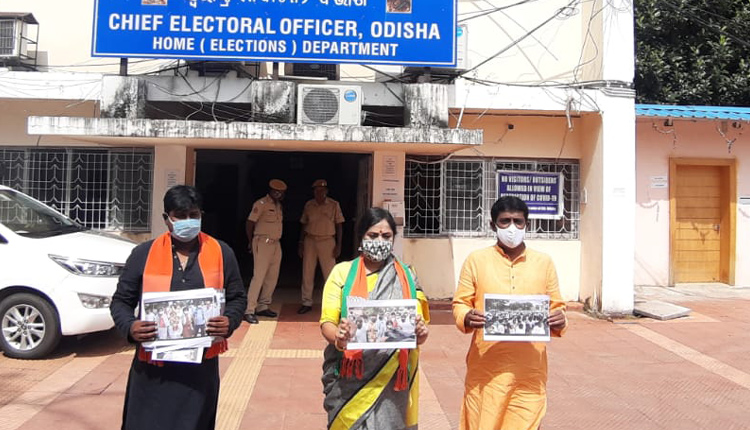 Bhubaneswar: With by-poll campaign gaining pace, the Bharatiya Janata Party (BJP) on Saturday met the Chief Electoral Officer (CEO) alleging violation of the election model code of conduct by the BJD and has sought immediate action against the violators.

A delegation of the BJP led by party’s State General Secretary Lekhashree Samantsinghar today complained with the CEO, Odisha against the blatant violation of the election code of conduct and Covid protocols in place by the ruling-BJD members.

The saffron party alleged that BJD leaders and its candidate for the upcoming Tirtol by-election Bijay Sankar Das violated the Covid norms during filing of nomination (on October 16) and also during BJD worker’s meet a day before that.

The senior BJP leader further levelled allegations against the BJD of distributing money to voters and engaging government vehicle during nominations. This apart the ruling party leaders including ministers and MLAs have not followed social distancing guidelines and usage of facemasks during the events.

“On the 15th, over 500 BJD members including MP Rajashree Mallick, MLA Debasish Samantaray and State minister Pratap Jena were inside a hall, throwing Covid guidelines to the winds. There was also a dispute during the worker’s meet. There has been a clear violation of Covid norms and election code of conduct,” alleged Lekhashree.

The BJD is yet to respond to the allegations made by BJP.