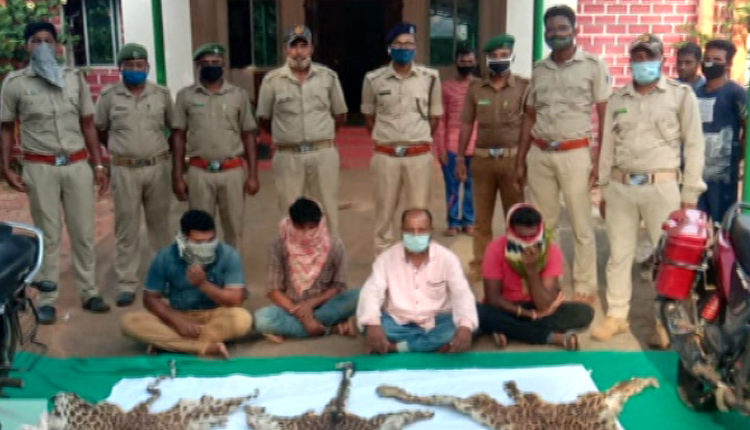 In a time when wildlife smuggling is rampant in the state, the forest department personnel seized three leopard skins and arrested four persons in this case atTentulikhuntaunder Nabarangpur forest range on Sunday.

Acting on a tip-off, the forest officials raided two places and busted the wildlife smuggling racket. Two bikes have also been seized.

Nabrangapur Principal Chief Conservator of Forest (PCCF) Harishankar Upaddhya informed that the forest department is investigating the whereabouts of the racket.

“We are investigating on how and from where the miscreants brought theses leopard skins. We are also tracing that how did they manage to hunt these wild animals,” Uppadhyaya said.

Earlier on September 3, a 40-year-old man was arrested in Mayurbhanj district for allegedly poaching wildlife inside Similipal National Park and a leopard skin was seized from him by the forest officials.

The leopard was killed about three months ago inside the Similipal National Park, the DFO said.

Leopard skins are used for home decoration or in the creation of luxury carpets.A case has been registered against Naik under relevant provisions of the Wildlife Protection Act, Mishra said.A motorcycle was also seized from the accused.