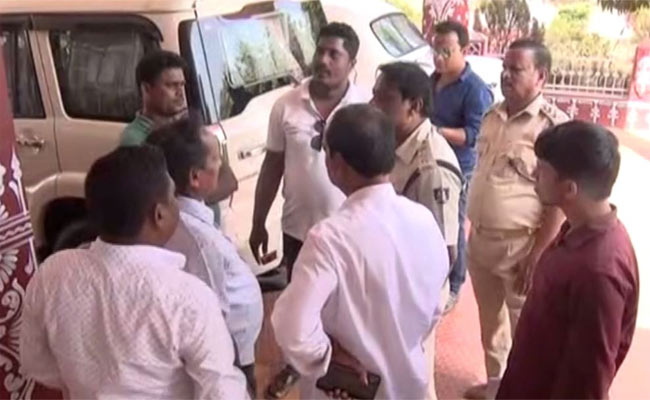 Khurda: Alleging police inaction, family members of the murdered BJP Khurda Mandal president Manguli Jena along with the villagers of Badaphokharia sat on indefinite dharna in front of the district collectorate here on Thursday.

“It has already been 11 months, but the police is yet to arrest the accused. Even though there is an eye-witness in connection to the incident, the accused are still at large. We will sit on dharna till all the accused are arrested,” said a relative of Jena.

Though police and the local MLA tried to pacify them, they insisted on continuing their protest till all the accused are arrested. Moreover, the wife of Jena has demanded CBI inquiry into the case.

A bike-borne miscreant had reportedly fired three rounds of bullets and killed Manguli Jena near BJP’s Nabina Bag office in the town in April last year before 2019 general elections.

Khurda BJP MLA candidate Kalu Khandayatra, who is the eye-witness of the incident, had then said, “As Jena was about to leave us after a meeting, we were discussing with him on the road when suddenly, a person riding a scooty came and shot two rounds of bullets at him and also opened fire another round of bullet at me. Even though I escaped unhurt, Jena was killed.”

It is alleged that Jena’s murder was the fallout of political violence and past rivalry. While the BJP had then alleged involvement of ruling-BJD leaders in the murder of Jena to gain political supremacy in the elections to Khurda Assembly constituency which was about to take place in a few days time, the ruling-party had strongly refuted the allegations.

All the accused were later forwarded to JMFC Court, Tangi and the CID reportedly submitted a plea to take them on police remand for further investigation and collect other vital clues.