Migrant Among 3 Killed, Many Injured In Separate Road Mishaps In Odisha 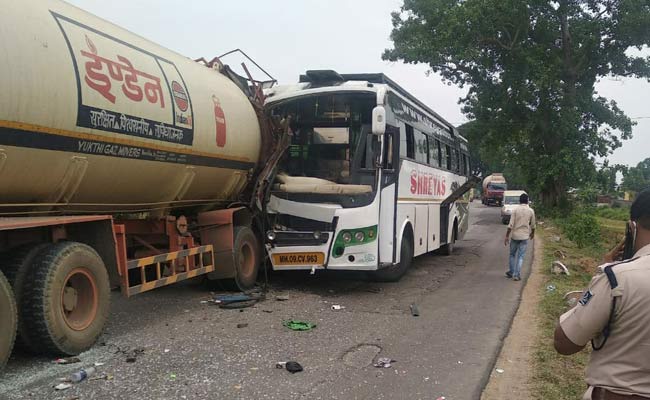 Bhubaneswar: At least three persons including a migrant labourer were killed while more than 17 persons sustained injuries in separate road mishaps in Odisha Tuesday morning.

As per reports, a bus ferrying passengers from Navi Mumbai in Maharashtra to West Bengal collided with a gas tanker near Luhamunda under Handapa Police limits on NH-44 in Angul district, leaving one person dead and 12 others injured.

The tanker driver lost his life in the accident while the injured persons have been rushed to nearby hospital for treatment.

The bus was reportedly bringing back around 24 residents of West Bengal who had gone to TATA Memorial Cancer Hospital in Mumbai for treatment. All of them were stranded there since enforcement of COVID-19 lockdown.

In another incident, a truck driver was killed his vehicle collided head-on with a bus near Panapana in Balasore district this morning. The driver of the bus who sustained grievous injuries in the mishap has been rushed to Balasore hospital. He is stated to be critical now.

Reports said the private bus was returning to Bhubaneswar after deboarding migrants in Kolkata when it met with accident near Panapana today.

Meanwhile, a migrant worker was killed after an iron-plate laden truck ran over him near Uliapatna under Khantapada police limits of Balasore district. The driver of the truck lost balance over the wheels reportedly after a tyre burst.

The driver has also been injured in the mishap and sent to nearby hospital for treatment.

Similarly, three persons sustained critical injuries after a truck and a bike fell off Duarsuni Ghat following head-on collision on National Highway- 49 in Mayurbhanj district today. The two injured motorists hail from Bisoi area of the district while the third injured is the truck driver of Nasik area in Maharashtra. All the three have been shifted to Baripda Hospital for treatment, added reports.

Police and fire personnel rushed to the spot after getting information from the locals and launched a rescue operation.

Late last night, at least 10 Odia migrants were badly hurt when the bus ferrying them from Tamil Nadu met with an accident near Tangi area in Cuttack district. The bus was reportedly enroute to Bhadrak district when the mishap occurred.