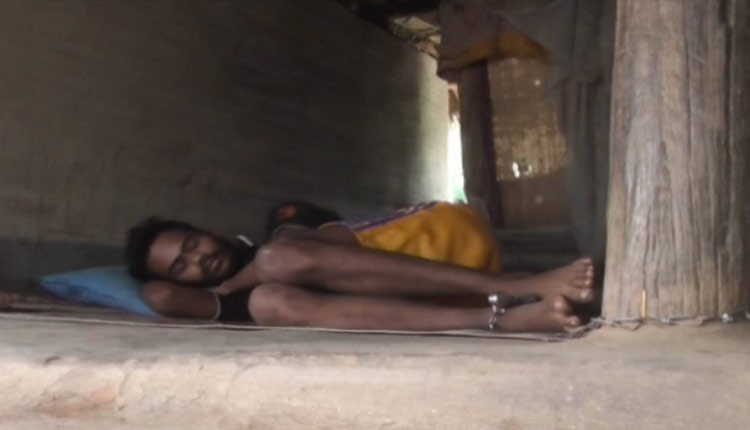 Baripada: For the last six months, Chunuram Tudu’s life has been confined within the four walls of his house at Chuturighat village under Kaptipada block of Mayurbhant district. The 23-year-old Chunuram, who is reportedly suffering from some psychiatric disorder for the last eight years, has been chained to a pole by his parents.

His family members said that they have no resources to afford Chunuram’s treatment. “Six months back, there was a sudden change in the behaviour of my son. He started attacking people and animals. So, villagers asked us to chain him or move out. Left with no other option, we tied him to a pole,” said Sarojini Tudu, Chunuram’s mother.

Sapan Tudu, a relative of Tudu informed that the family members spent their entire savings on Chunuram’s treatment. However, they are now helpless as they have no funds to seek further medical assistance.

Chunuram was reportedly a meritorious student but he had to quit studies following the mental illness. Locals now demand assistance from the State government as it seems to be the only ray of hope for the poor family.

“Chunuram is an educated youth. As his family comes from a poor financial background, they are unable to provide necessary treatment to him. We request the district administration and the State government to provide help to the family,” said social activist, Nirupama Rana.

After the matter was brought to the notice of the district administration, Kaptipada Sub-Collector Bhagwan Behera assured to take appropriate steps in this regard.

“We will ask the BDO to visit the village and ask health officials to take necessary measures for the treatment of Chunuram,” said Behera.