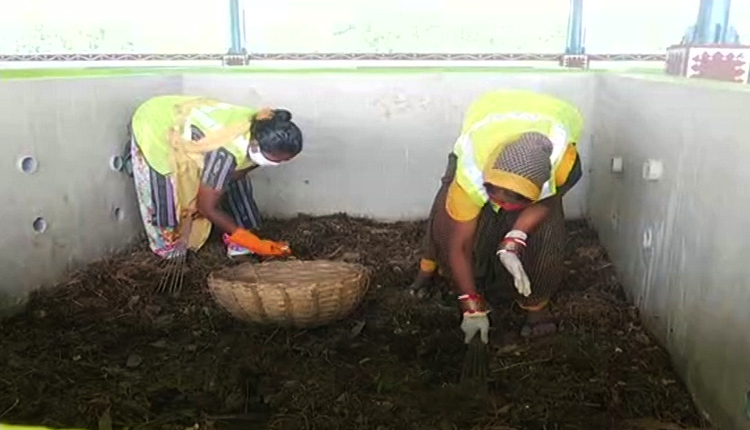 Kendrapara: While chemical fertilizers are being used abundantly in agriculture resulting in depletion of soil nutrients apart from environmental and health hazards, the municipal authorities of Kendrapara has set up one-of-its-kind micro composting centre at Hajaribagicha to prepare organic manure.

The initiative is a replica of Tamil Nadu’s model of Micro Composting Centre for proper segregation and management of wet waste.

The municipality has reportedly engaged women from 21 wards of Kendrapara town, who are visiting door-to-door to collect domestic garbage. The degradable and non-degradable items are then segregated at the MCC.

Supervisor of MCC, Rojalin Das said, “We have engaged women members for collecting solid wastes from 21 wards of the town. The wastes were earlier thrown outside which polluted the environment.”

“We segregate degradable items like leftover food items, fruits, vegetable wastes from garbage and mix them with curd, sawdust and jaggery. They are left to dry for around 42 days after which they are deemed fit for use as organic manure,” said Babu Gochhayat, a worker at micro composting centre.

Built with an expenditure of Rs 50 lakh, the Micro Composting Centre has 14 big waste taps. The fertilizer is being sold in packets at Rs 5 per kg to the farmers and locals through several SHGs.

While 1.30 tonne compost is being manufactured at the composting centre, the Kendrapara municipality said they will have set a target to produce 5 tonne compost per day.

Sources said, the amount of profit earned from the project will be spent on the SHGs that have been given the responsibility of running the MCC. The municipal authorities said the use of organic compost will be helpful in growing fruits, vegetables, flowers and other horticultural activities in a better eco-friendly way.

“This is purely organic compost without trace of any chemicals. The compost can be used gardening and agricultural activities,” said Executive Officer of Kendrapara Municipality, Debaprasad Bal.

Organic Farming Is The Only Way Forward In Long Run: Odisha Farmers Show How