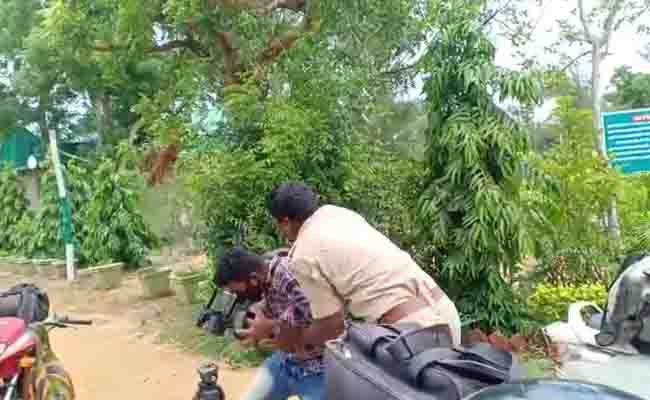 Puri/Bhubaneswar: The Divisional Forest Officer of Puri on Sunday suspended two forest employees on charges of manhandling a journalist and his cameraperson.

According to sources, a reporter and camera crew of a news channel had gone to Puri to document a report on the occasion of completion of one year of Cyclone Fani which battered the Odisha coast after making landfall at Satpada near Puri exactly a year ago on May 3, 2019.

The two forest employees reportedly exchanged heated arguments with the journalist and his camera.

Even though the exact reason behind the incident is not available, a video that went viral on social media showed how the forest staff manhandled the scribe and also tried to attack the cameraperson and snatched his equipment near Balukhand Wildlife Sanctuary.

Video showing a forest guard manhandling cameraperson of a news channel at Balukhand Wildlife Sanctuary goes viral; the incident took place when the cameraman along with a reporter had gone there to prepare a report on completion of one year of #CycloneFani #Odisha pic.twitter.com/TZ93xjwyHf

Later the DFO ordered an inquiry into the attack incident on the journalist and suspended the two forest employees based on the probe report.