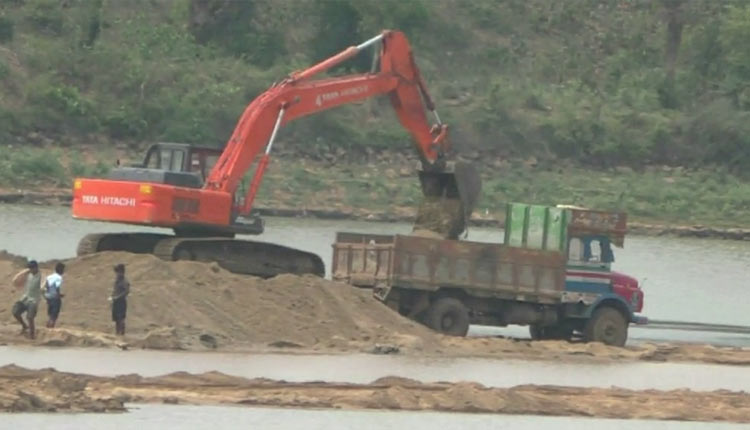 Bhadrak: Illegal sand mining on Baitarani river banks in Bhandaripokhari block of Bhadrak district has grown over the years and so is the district administration’s alleged inaction which has been encouraging unhindered loot of the resources.

Bairatarini river flows through Bhandaripokhari, Dhamnagar, and Chandabali blocks of Bhadrak district. Every year floods create havoc in these areas and locals allege that rampant sand mining on its banks adds woes to the nearby village panchayats.

Chittaranjan Nayak, a local says, “The illegal mining near our village has increased manifold over the years due to which possibility of flood is growing in the nearby villages.”

“The district administration has turned blind eye to the sand mafia. They are deliberately allowing the illicit transport of sand,” he says.

Duryodhan Lenka who is aggrieved over the situation narrates that sand mining continues in an unbridled manner on a 30 km stretch of the river that too under the very nose of the administration.

“Due to the quarrying activities from Akhuapada of Bhadrak to Dehudi in Anandpur, Baitarani River has been changing its course time and again and creating floods every year,” he says.

“Apart from the geological and ecological damage, the State government is also losing crores of revenue due to illegal mining. There has been no concrete action taken against illicit mining mafia which is encouraging them to continue their smuggling,” Lenka adds.

Manoj Nayak, the Sarpanch of Ranajit panchayat informed, “Government is not calling periodic auction for mining. We have complained several times but authorities are not heeding to our complaints.”

“Illegal mining has resulted in an artificial river called Gengei in the region. If government doesn’t take immediate action then more than 8 panchayats will get marooned during the floods. We will be forced to agitate against the government if our problems not solved soon,” Nayak added.

Asked about the situation, Bhadrak district collector, Gyana Das said, “We are aware of the problems caused due to illegal mining. Administration gets revenue from Dhamnagar tehsil and Bhandaripokhari sand mining zones. We are in a process to execute the action.”

“There are two additional Revenue Inspectors appointed in those blocks. We will ensure to check unauthorised mining. No sand beyond the auction limit will be allowed in future.” Das informed.