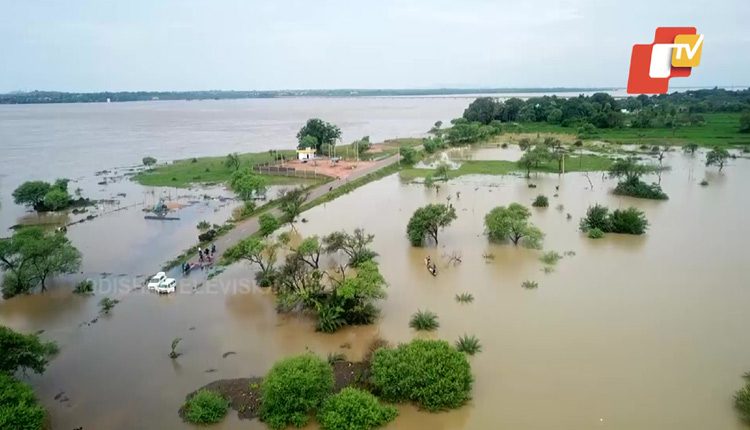 Bhubaneswar: The flood situation in Odisha continued to remain grim with major rivers across the State swelling on Sunday. The flood in Mahanadi River system has inundated several parts of the State while excess flood water continues to be released through 46 sluice gates of Hirakum Dam.

According to sources, low-lying areas like Kainmundi, Sukhuakhela and Bilipada under Banki block in Cuttack remained cut-off after Mahanadi River developed a breach near Gayalbanka area in the district on Saturday.

Vehicular movement on many routes has been affected as flood water is flowing over the roads and bridges in the district. Road communication between Banki and Baideswar has also been snapped, sources informed.

With Mahanadi River being in spate due to inflow of flood water from Hirdakud, Harbhanga in Boudh, Ulunda in Subarnapur, Ambabhona in Bargarh and Lakhanpur in Jharsuguda have been inundated.

Similarly, the situation is nothing different in Sambalpur, Jagatsinghpur and Khordha. Around 20 villages under Orabarasingh and Narangada panchayats in Khordha district reportedly marooned due to rise in water level of Daya and Rajua rivers.

Over 8.02 lakh cusec water is entering Hirakud dam and more than 7.6 lakh cusecs of water is being discharged through its 46 of the 64 sluice gates.

The Central Water Commission (CWC) on Saturday issued a red bulletin for Chhattisgarh. According to the red bulletin, Mahanadi was flowing above its danger level at Surajgarh Kalma breaking all previous records.

The floodwater in Odisha has so far destroyed at least 3 lakh hectares of farmland and left as many as 16 people dead.