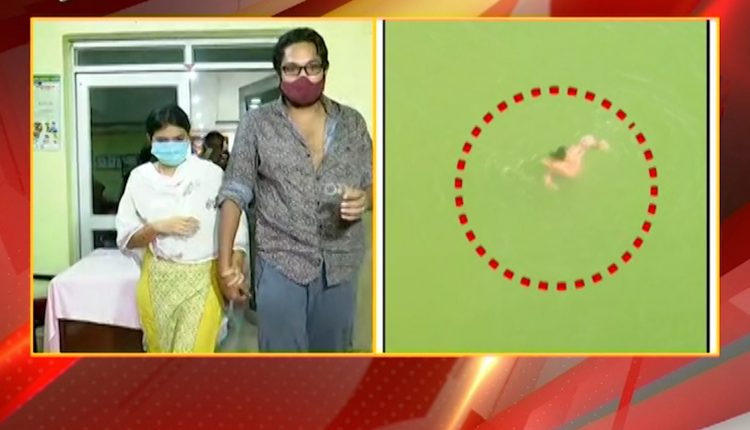 Cuttack: Ollywood actor Amlan Das’ wife, Bhumika on Monday rubbished reports by some sections of media which speculated that she had jumped into Mahanadi River following some disputes with her husband.

In a video, Bhumika today urged everyone not to believe such fake news or spread rumours and categorically stated that she accidentally fell into the river after losing her balance while throwing puja articles in the water body.

“I had gone to the river to immerse some puja articles. May be because it was my fast, my head started spinning and I slipped into the river after I lost balance. It was also due to my high-heel footwear,” Bhumika clarified.

In the video message, Bhumika further appealed people not to spread rumours and malign the image of her family and husband, Amlan.

#WATCH | “Please don’t spread fake news & rumours to malign the image of my husband or my family. There is no dispute between us.” – In a video, Ollywood actor Amlan Das’ wife Bhumika rubbishes rumours that she had jumped into Mahanadi River after a family dispute. #Odisha pic.twitter.com/6PP7pUN8rY

It is pertinent to mention here that Bhumika was rescued by locals along with a team of fire services personnel after she fell into Mahanadi river from Madhusudan bridge Sunday afternoon. Fortunately, her condition was stable when she was rescued. Following the incident, reports were abuzz that Bhumika jumped into the river in an attempt to end her life after a family dispute.

Later, both Bhumika and her husband Amlan were taken to CDA-Phase II police station where they were quizzed by the cops for sometime.

Meanwhile, a case has been registered at the CDA Phase-II police station and further investigation in this connection is underway, sources said.

Both Bhumika and Alman had tied nuptial knot in February this year.