DL Suspension For No Helmet: Bikers In Cuttack Come Up With Bizarre Excuses 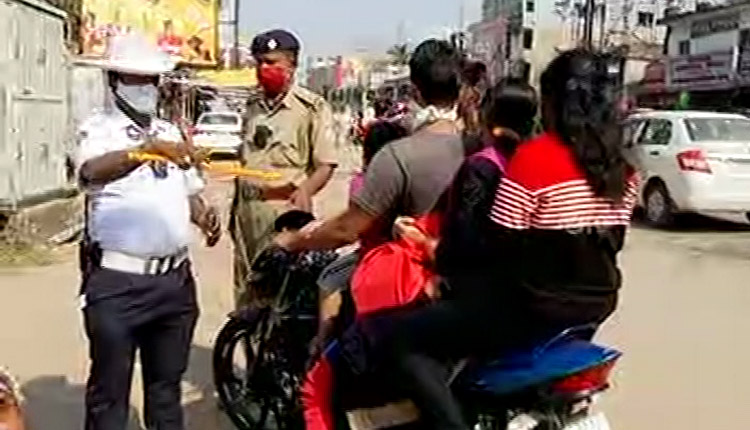 Cuttack: Even as the Odisha government has recently come up with stringent norms to suspend the driving license (DL) of the persons found driving motor cycles without a helmet, commuters in Cuttack surprisingly find it tough to comply with the guidelines.

During a routine enforcement drive conducted by the Commissionerate Police on Friday, a lot of commuters were seen making lame and hilarious excuses for not wearing helmets—which certainly protects the wearer’s precious life.

“I have recently recovered from COVID-19 and still facing several health issues and complications like dizziness. Under such circumstances, do I need to have wear the helmet?” argued a commuter.

Another biker who was caught without the head gear clarified that he had stepped out of the house in a hurry with his daughter to buy medicines.

But the funniest of all excuses was when cops intercepted a biker without helmet to which he clarified that he forgot to wear the helmet as he started driving his motorcycle immediately after attending nature’s call.

It is pertinent to mention here that the Commerce and Transport department principal secretary Madhu Sudan Padhi in a letter has urged the Director General of Police (DGP) and Transport Commissioner to take necessary steps for suspension of DL of the offenders in case of detection of violation of Helmet Laws and also closely monitor its implementation in the State.

As per Section 194 D of the Motor Vehicles (MV) Act, “Whoever drives a motor cycle or causes or allows a motor cycle to be driven in contravention of the provisions of section 129 will be fined Rs 1000 and S/he shall be disqualified for holding license for a period of three months.”

The bizarre excuses made by motorists is Cuttack is a wakeup call for the enforcing authorities including the Commissionerate Police as experts bat for urgency in toughening against such violations.

Pfizer Seeks Emergency Approval For COVID-19 Vaccine From US Regulators

BTS’s Jungkook Crowned As ‘The Sexiest Man Alive’, These Pictures Prove He Deserves It