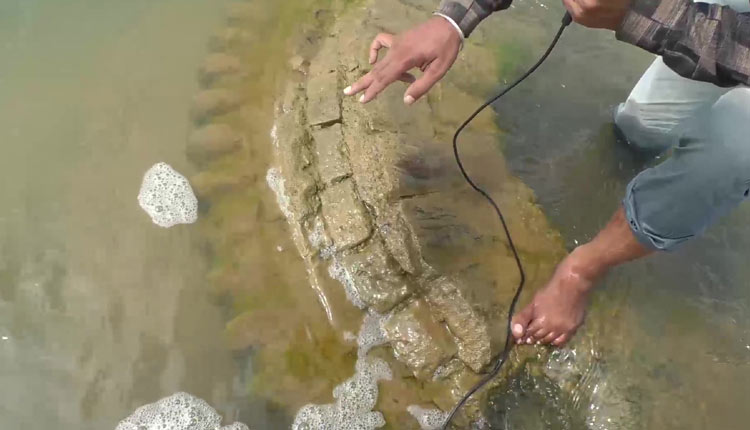 Bhubaneswar: Union Minister Dharmendra Pardhan has sought the intervention of the Culture and Tourism Minister Prahlad Singh Patel in directing the Archaeological Survey of India for restoring and relocating the 500-year-old Lord Gopinath Temple that re-emerged in the middle of Mahanadi River near Baideswar in Padmavati village in Nayagarh district recently.

In a letter to the Culture and Tourism Minister on Wednesday, Pradhan said, “A 500-year-old temple dedicated to Lord Gopinath, a form of Lord Vishnu has re-emerged out of the Mahanadi River in Nayagarh district. I understand that the non-profit organization Indian National Trust for Art and Cultural Heritage (INTACH) has examined the temple and deemed it to be of major historic significance and in a good state of preservation.”

The 55 to 60 feet submerged temple dates back to the late 15th or early 16th century, considering its construction style and materials used for the construction. It is theorized that the temple was submerged in 1933 following floods in the region, added Union Minister Pradhan.

Therefore, keeping in mind the intangible historical, cultural, and religious significance of the temple to the people of Odisha, Pradhan urged the personal intervention of Culture and Tourism Minister in directing officials of the ASI for undertaking restoration and relocation of Gopinath temple to a suitable site.

It may be noted that a survey team of INTACH had located the temple in Mahanadi waters a few days back. The national heritage watchdog had launched a one-of-its-kind project on the Documentation of the Heritage of the Mahanadi Valley under the supervision of historian Anil Dhir and the discovery of Gopinath Temple is also a part of the project.

The top of the Gopinath Dev Temple was reportedly last seen some 11 years ago and it has re-appeared due to the reduction in the water-level of Mahanadi River in the area.