Cyclone Amphan: With 7 Lakh Expected To Be Affected, Odisha Swings Into Action Mode 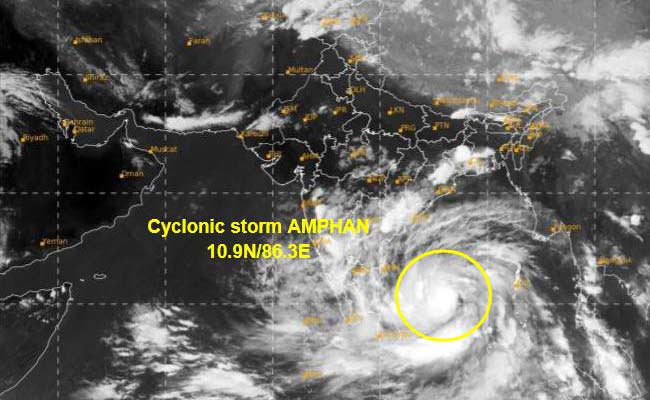 Bhubaneswar: With the depression in Bay of Bengal intensifying into cyclonic storm Amphan, Odisha government is bracing up to face any situation as the storm is expected to re-curve and move towards north Odisha coast.

While briefing the Cabinet secretary about State’s preparedness, Chief Secretary Asit Tripathy informed that, “As per the predicted path of the cyclone, around 7 lakh people in 649 villages along the sea coast are likely to be severely affected. The standing crop in lakhs of hectares, particularly, ripe summer paddy, pulses, oil seeds, cashew, mango, vegetables and coconut are likely to be damaged in the heavy rainfall and wind.”

As per the predicted path of the cyclone, around 7 lakh people in 649 villages along the sea coast are likely to be severely affected: #Odisha Chief Secy during review meeting with Union Cabinet secretary Rajiv Gauba pic.twitter.com/wdaWngjJRL

Tripathy further stated that “All the 12 coastal districts have been kept under alert and they are prepared for any eventuality in case of change in track of the cyclone.” 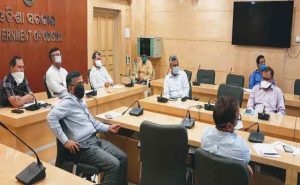 As this will be a summer cyclone, there will be no risk of flooding in the State. However, the Collectors have been asked to conduct an analysis of the vulnerability and ensure evacuation of people living in low-lying areas as well as those staying in kutcha houses.

As per government sources, out of the total 809 cyclone or multipurpose shelters in 12 districts, 242 are now being used for COVID-19 purposes while the rest 567 are vacant. Besides, 7,092 other buildings have been identified which can be utilised as temporary shelters.

“IMD has informed that a cyclonic storm formed in the Bay of Bengal is likely to affect Odisha coast during May 18 to May 20. Every effort should be taken to save every precious human life and make provision for relief for affected people,” said Patnaik while interacting with Collectors and other officials through video-conferencing today. 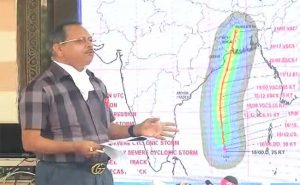 Patnaik further stated that Odisha has faced severe cyclones like Phailin, Hudhud, Titli, Fani and Bulbul and managed successfully. “I appeal people not to panic and cooperate with the administration to effectively manage the situation,” the CM said.

“As per the India Meteorological Department (IMD) data, the cyclonic storm may make a landfall on May 20 but its exact track is not clear yet. A clear picture is likely to emerge only after it re-curves,” said Special Relief Commissioner, Pradeep Jena.

#Odisha is working in the direction of ensuring ‘zero casualty’ and Collectors asked to conduct vulnerability analysis in view of the summer cyclone: SRC Pradeep Jena#CycloneAmphan pic.twitter.com/W2P7FQIvl3

According to Jena, several districts of Odisha mostly north and southern districts will experience moderate to heavy rainfall from May 18 which is likely to continue till May 20.

Odisha Disaster Rapid Action Force (ODRAF), National Disaster Response Force (NDRF) and Fire Services personnel have been asked to remain prepared. However, their pre-positioning will be decided following latest forecast by IMD regarding the path of the cyclone.

“Following instructions from State government, we have already alerted all the 300 plus fire stations to test existing equipment like mobile lighting towers, boats and others which can be mobilised as required,” said Chief Fire Officer, Sukant Sethi.

Sethi further informed that besides the coastal belt, 30 teams each from western and nearby areas will be stationed in Ganjam, Balasore and Bhadrak to assist the existing personnel deployed in these districts.
A senior NDRF official said that despite COVID-19 challenge adequate steps are being taken to meet any emergency situation arising out of the cyclonic storm Amphan.

“Our personnel and rescuers have been provided with personal protection kits and other equipment which will be used for rescue and road clearing works,” said the NDRF official.

You May Also Like: Cyclone Amphan will turn extremely severe near Odisha coast!