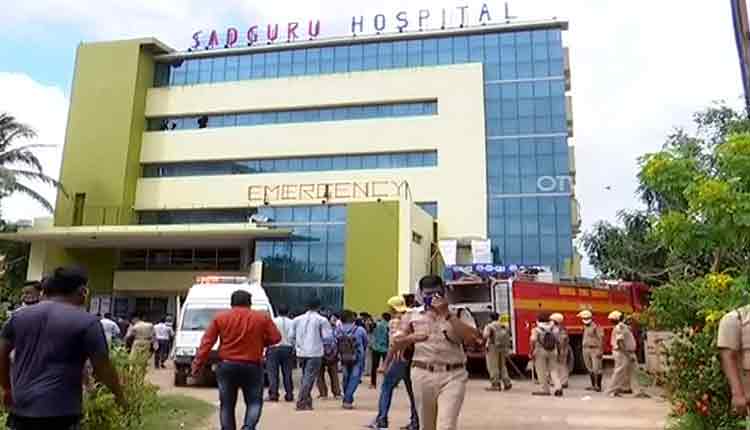 Cuttack: The Revenue Divisional Commissioner (RDC-Central Range), Anil Samal on Monday ordered a probe into the fire mishap at a COVID hospital in Cuttack. Though no casualty was reported in the fire, all the patients undergoing treatment at Sadguru hospital at Jagatpur have been shifted to other hospitals following a long rescue operation.

A detailed inquiry would be conducted to ascertain that what caused the fire at the hospital, said Samal adding that all the 127 patients including those who were undergoing treatment in ICU have been shifted to SCB, Ashwini and other hospitals.

Samal further stated that though nobody has been injured in the mishap, a detailed investigation will be conducted to ascertain what triggered the fire. Moreover, steps will be taken to ensure that such incidents do not recur.

Earlier, panic gripped attendants after a fire mishap was reported at the COVID hospital today. As many as 127 COVID-19 positive patients were undergoing treatment at the hospital.

“At around 1 pm, we heard a loud noise. Later, the entire hospital was filled with smoke. There was utter chaos and patients came out of the building using mobile flash lights,” said a patient.
Cuttack Collector, Bhabani Shankar Chayani informed that all the critical patients have been evacuated and admitted to other hospitals.

“It was certainly challenging for everybody. However, the situation was successfully managed,” said Chayani.

#CuttackCOVIDHopsitalFire: The fire was caused due to short circuit in an air-conditioner, informs Dr Samita Mohanty of the hospital #Cuttack https://t.co/klhFUdpwe0

Also Read: Fire Breaks Out In COVID Hospital In Cuttack