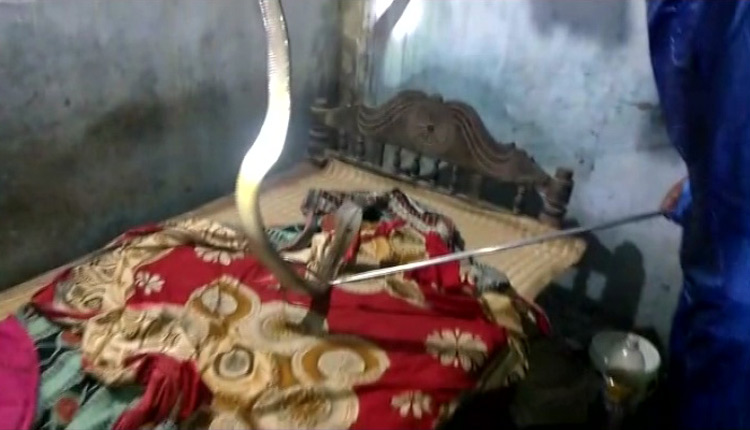 Cuttack: Panic struck the family of Sharat Panda after a venomous spectacled cobra (Asian Cobra) was found inside their bedroom in Harirajpur village under Banki block of Cuttack district on Tuesday.

After the sighting, they immediately called the Snake Help-Line who reached the spot in minutes and rescued the reptile from underneath a bed-sheet in their bedroom. The snake was later released into the wild.

As per the reports, the five-foot-long cobra is suspected to have entered the house from the backyard following incessant rain that has been battering the areas under Banki and Athagarh over the past few days.

Sambit Panda, a relative of Sharat said, “My mother spotted the snake first. After entering the house, it went to the kitchen and finally went into the bedroom.”

“We shut the door and called the snake helpline at Banki. They reached our house and rescued the snake. I thank God that nothing happened to anybody and the snake also was taken away safely,” added Sambit.

Speaking to OTV on ways to keep snakes away in the absence of snake helpline, wildlife expert, Subhendu Mallik said, “People should always keep an eye on the snake if it trespasses their boundary. A 7-8 foot long stick with cloth wrapped on one end of it will be helpful in the absence of experts. Pour some phenyl on the cloth-end of the stick and let the snake inhale. The pungent smell will drive the snake out,” added Mallik.

However, Mallik cautioned people by advising them to exercise extreme caution while handling snakes and take help of experts.