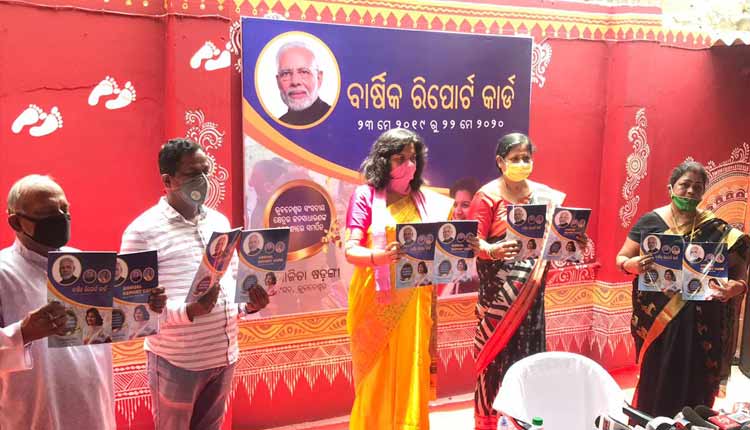 Bhubaneswar: Terming the FIR lodged against her as vendetta politics of Odisha government, Bhubaneswar MP Aparajita Sarangi today said that she had taken all the precautions and followed social distancing and other COVID-19 norms during a public meeting where she shared the achievements of Narendra Modi government with people.

Expressing surprise over the FIR, Sarangi clarified that she had also put her mask on during the event and also shared a video in support of her claims.

Taking to twitter she said, “This appears to be a government sponsored FIR in response to the report card recently released by me. As people’s representative, I will continue to work for the people by following COVID-19 guidelines. This attempt to dissuade me from working for the welfare of people will not succeed.”

The former bureaucrat also shared her one year of achievement as the Bhubaneswar MP and said, “I submitted my Annual Report Card before the residents of Bhubaneswar Parliamentary Constituency on completion of my first year as a Parliamentarian. I will come up with this report every year during Rath Yatra.”

Meanwhile, the Bhubaneswar Municipal Corporation (BMC) has sought ‘action taken report’ from the Commissionerate Police on the matter.

As the Additional Commissioner of BMC, investigating the COVID-19 norms violation allegations brought against the MP has also confirmed violation of the guidelines, the BMC has asked the Bhubaneswar DCP to submit details related to the actions taken against the Parliamentarian so far.

“The BMC has banned any form of political, social, cultural gatherings in the city. We have registered 5 to 7 cases over violation of the norms,” informed BMC Commissioner Prem Chandra Choudhury.

Earlier, a similar complaint was filed against Sarangi at the Capital police station. Later however, she gave a clarification saying that she volunteered to pay the fine due as per the rules.

Not only BJP, recently, State Congress-led protest against the alleged mismanagement of Covid situation by Odisha govt which was supported by 13 other left parties had also landed OPCC chief Niranjan Patnaik in trouble. The police had collected fine from the protesters on charges of Covid guideline violation.

BJP leader Babu Singh said rules are different for different political parties. “There have been instances when leaders of ruling party are flouting Covid guidelines but no action is taken against them,” he said.