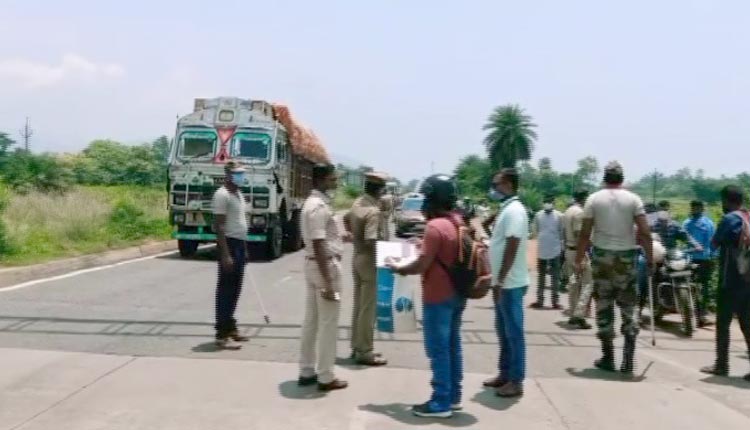 Bhubaneswar: With the relentless surge in cases of Covid-19, the Ganjam district on Wednesday sealed the border of the district adjoining Khurda and Nayagarh to limit the movement of people to and from the region.

Taking to Twitter, Ganjam district authorities informed that no person will be allowed to go to Bhubaneswar as the border has been sealed. The decision was reportedly taken in view of the rising cases of Covid-19 and in order to prevent local transmission of the virus in the district.

After the move by the administration, Odagaon Rohibanka & Bhanjanagar Crossing chhak road have also been sealed.

Soon after the border between Ganjam and Khurda was sealed in the morning, large numbers of vehicles were seen standing on both sides of the borders near Gurapalli check gate in the district. Similarly, ambulances were also seen waiting for checking by police on the gate.

“People will be allowed inside and outside Ganjam district only if there is an emergency situation. In order to keep a tab on the movement of the people between the two districts, we have kept check posts at seven places. Those traveling with genuine reasons are being allowed, others are being requested to go back,” informed Ganjam SP Brijesh Rai.

The Khurda district administration has also beefed up security and conducting vehicle checking near Kumarpari and Naval Chhak. The administration has also deployed two magistrates and four officers to monitor the situation at the borders. Similarly, one platoon of police force has been also engaged for 24X7 checking at the entry and exit point between Ganjam and Khurda.

“As coronavirus cases are rising in Ganjam district, therefore we have been directed to not allow any person from Ganjam to enter Khurda or Bhubaneswar. We will conduct 24 hours checking on the border,” stated Khurda SP Ajay Pratap Swain.

Looking at larger public interest and to contain the spread of Covid-19, the district administration has also shut down the OPD of the MKCG hospital in Berhampur until further orders.

All entry points of the medical campus except the main gate has been sealed. In order to maintain law and order, additional police force has been deployed in Berhampur city. After the implementation of the order, only emergency patients and staff are only allowed entry into the hospital campus.