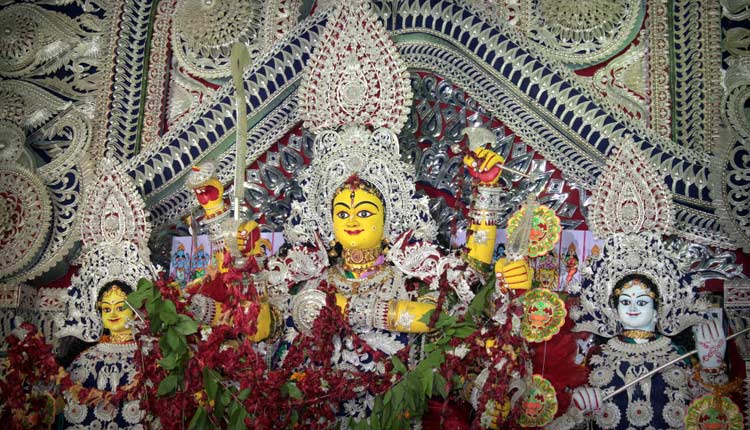 Cuttack/Bhubaneswar: It is that time of the year when people, wherever they are residing, either for job or any other purpose, come back to their native places to celebrate the festivities with series of shopping, pandal hopping and rejoicing with families and friends.

With Covid-19 pandemic scare and consequent restrictions imposed by the government, the extravaganza in the twin cities of Cuttack and Bhubaneswar in Odisha this year seems to have taken a back seat.

The puja committees this time have decided to keep celebrations a low key affair, hosting rituals and distributing bhog online, limiting height of idols and toning down embellishments, keeping cultural programmes at bay.

Let’s have a look on how some of the prominent Durga puja committees of Cuttack and Bhubaneswar are celebrating the festival with the new normal amid the pandemic.

The Binod Bihari-Balu Bazar Puja Committee has been celebrating Durga Puja since 1509 and regarded the oldest puja committee in the millennium city.

The height of Balu Bazaar idol has been decreased to 6.9 feet this year. Similarly, while at least 98 kilograms of gold and silver ornaments is generally used in the tableau of the goddess, the ornamentation has also been reduced keeping in view the height of the idols.

“The orders of the Orissa High Court and State Government shall be strictly followed during the rituals and immersion. We are requesting people not to visit pandals and instead opt for online darshan of the deities,” said President of the committee, Suryakant Sanganeria.

The durga puja celebrations at Sheikh Bazaar dates back to 1975 and it is the second puja committee in the city which made a silver tableau weighing 350 kg for the goddess in 1991. Later in 2005, the deities were adorned with golden crowns. But this year, the committee has decided not to use filigree backdrop (tableau) and gold jewellery to decorate the idols.

“The usual height of the Maa Durga idol is kept at 7.5 feet but this year that has been decreased to 4-feet. Therefore, the silver backdrop and ornaments have not been used. Instead, we have made the medha and ornaments using thermocol, which almost appears similar to the silver one,” said the puja committee secretary Kishore Behera.

The committee is also sensitising the locals not to visit puja mandaps through leaflets and go for online darshan of Maa Durga.

Besides, ‘Dahi Pakhal Bhog’ which is offered to the goddess on Dashami and distributed among 3,000 people will not be done this year.

Saheed Nagar Durga Puja Samittee is one of the oldest puja committees of Bhubaneswar. The marquee here is famous for its different theme every year and attracts lakhs of devotees. But this time, there will be a blanket ban on the entry of visitors to the pandal, as per the directive of the government for Covid-19 outbreak.

Instead, the rituals will be live streamed on Facebook and Youtube at different times between October 23 and 26. People have been requested to offer puspanjali online from their homes.

“The devotees attending pushpanjali live will be requested to be ready with flowers and other items. As soon as the priest completes the rituals, the devotees will be asked to offer pushpanjali to the Goddess while staying in their homes,” said the secretary of the samiti, Narayan Mohapatra.

The samiti has made provisions for delivery of prasad between October 23 and 26 which can be booked in advance. The prasad will be prepared by professional cook and will be packed with utmost care and hygiene.

Unlike every year, no pandal has been erected this year. The samiti came up with Kaisarbagh palace of Lucknow last year which was a hit among the pandal hoppers in Bhubaneswar.

The Nayapalli Puja Committee has been organising Durga Puja since 1988. Every year it creates majestic welcome arches depicting social issues and heritage monuments.

Last year, the Nayapalli pandal remained a major crowd-puller with its minutely designed structure of Rajasthan’s Padmavati Palace. The pandal was decorated with all kinds of biodegradable items like seashells, conches, and artificial fruits which sent the message of green Durga Puja.

However, this year devotees will not be allowed to participate in the puja. “We generally start the pandal work six months before the puja. As per government order, we are only performing rituals as per tradition and there is no decorative arch or pandal this year,” said the president of the puja committee, Pabitra Mohan Behera.

Beyond Boundaries: DigitalDurgaPuja.com To Bring The Goddess Live On Your Smart Phones

61% Indians Sceptical About Covid Vax Even If It Came In 2021: Survey