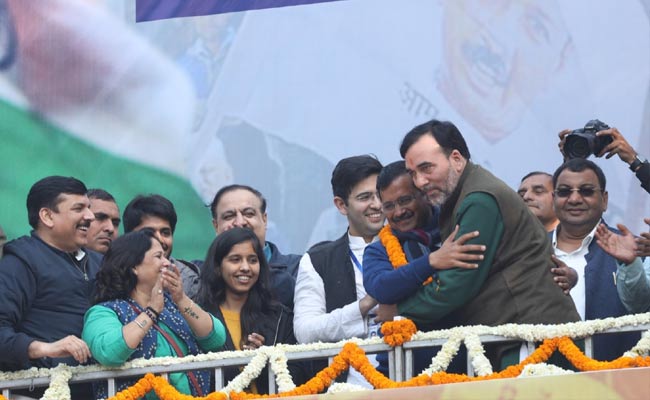 The Delhi voter has spoken – loud and clear. And the message that he has delivered has ramifications that go well beyond the boundaries of the National Capital Region (NCR). Here is this author’s take on the 10 big takeaways from the Delhi election results.

1. Hate as a political weapon is not acceptable to the Indian voter. No matter what spin BJP leaders try to give, the fact is the entire campaign of the party was based on hatred for the ‘other’: Muslims in the main, but also Hindus who don’t subscribe to its idea of India. The voter in Delhi has given an unambiguous Thumbs Down to its effort to polarize the electorate on grounds of religion and ideology.

2. The Indian voter has learnt to differentiate between the general (Lok Sabha) elections and state (Vidhan Sabha) elections. He now understands that the issues and priorities in the two elections are different. He is not swayed by parties or leaders but has learnt to think and decide what is best for him in a particular election. In short, he has become more mature. The general elections in April-May and Assembly elections in several states in the last few years had already given indications of this newly emerging trend. The Delhi voter has only reiterated it in a more emphatic manner.

3. For the same reason, parties ranged against the BJP should resist all temptations to over-interpret it and see it as an unambiguous rejection of the Modi-Shah brand of politics or as ‘proof’ of the dwindling popularity of the Deadly Duo. For all we know, the BJP could still romp home if there is a Lok Sabha election tomorrow. After all, the party did raise both its seat tally and its vote share over the last election despite the resounding victory of the AAP.

4. The two preeminent ‘national’ parties – BJP and Congress – must understand that the ‘one size fits all’ narrative they have followed in the last few elections has run its course. They must realize they have to come with a state-specific narrative that the voter in the state identifies with, create conditions for local leadership to evolve and focus on strengthening their party organisation. In a way, the BJP was forced to take recourse to the same strident Hindutva and nationalist rhetoric that had come a cropper in Jharkhand only recently by the organizational weaknesses of its Delhi unit and the lack of a credible face to match Arvind Kejriwal.

5. Contrary to what BJP would like us to believe, the Citizen’s Amendment Act (CAA) – and its country cousins: National Register of Citizens (NRC) and National Population Register (NPR) – do not have the endorsement of large sections of the electorate. The thumping verdict in favour of AAP and Kejriwal has made it abundantly clear that they are opposed not just by Muslims as the BJP wants us to believe, but by a large section of Hindus as well.

6. Vital sectors like education, healthcare, power, water and roads etc. matter a lot more to the voter than emotive issues that seek to create divisions in terms of Hindu vs Muslim, ‘desh bhakt’ vs ‘desh drohi’ and so on.

7. No matter how hard the Pink Paper economists try to posit them as a drain on the nation’s resources and ’wasteful expenditure’, what passes under the overarching label of ‘freebies’ do have a role in Indian politics and it’s not going to change anytime soon – more so the much bigger ‘freebies’ given ritually by all central governments, including the present one, every year never invite the frown of these grey eminences.

8. Congress has completely lost the plot. It must reinvent itself with a new non-Gandhi leadership, effect a thorough overhaul of its moribund party organization, free its state units from the vice-like grip of the ubiquitous ‘high command’ and give a measure of autonomy to its state units and find a new narrative that resonates with the largely young electorate or risk being pushed into the margins for good. Harping on its glorious past or singing paeans to its past stalwarts (read three generations of Gandhis) will not do.

9. The second successive resounding victory in Delhi has clearly whetted the appetite of the AAP, which has brought its national ambitions to the fore, as can be seen from the fresh membership drive the party launched and the slogan “Associate with AAP for nation-building” it put up at the party headquarters on counting day.

10. At the same time, the results must have also whetted the appetite of voters across the country. From now on, they will expect and demand solid work on the ground on ‘sadak, bijli, paani’ issues by political parties and not be fooled by empty rhetoric.

Will Work Closely With Centre For Delhi: Arvind Kejriwal To PM Modi