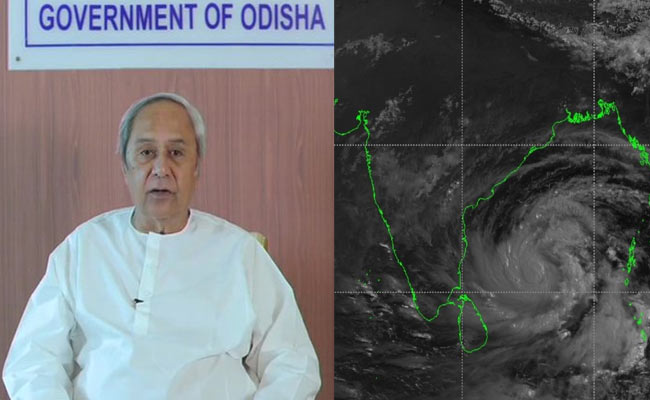 Bhubaneswar/Kolkata: With the formation of cyclonic storm ‘Amphan’ likely to impact Odisha from May 18, Chief Minister Naveen Patnaik on Saturday put a target of zero casualty before administration, which is in the midst of a battle against COVID-19.

Considering the gravity of the cyclonic storm, the state government during the day urged the Centre to temporarily suspend Shramik Special‘ trains passing through areas falling in the direction of the cyclone.

Since the sea condition will be rough to very rough over south and adjoining central Bay of Bengal and Andaman Sea, it warned fishermen not to venture into the sea along and off the Odisha coast from May 18 onwards.

Similarly, fishermen in West Bengal have also been advised not to venture into north Bay of Bengal along and off West Bengal-Odisha coasts from May 18 to 21, and those who are out in the sea were asked to return to the coasts by May 17.

According to the latest India Meteorological Department (IMD) bulletin, the deep depression over Southeast Bay of Bengal and neighbourhood remained practically stationary during the past six hours and rapidly intensified into a cyclonic storm ‘Amphan’ (pronounced as UM-PUN).

It is very likely to move north-northwestwards initially till May 17 and then recurve north-northeastwards across northwest Bay of Bengal towards West Bengal and adjoining North Odisha coasts during May 18 to 20, the IMD said.

Patnaik reviewed the state’s preparedness to face the cyclone, which according to the IMD will impact the state between May 17 and 20.

“As always, saving lives is our priority. We should put our best efforts to save every precious human life,” Patnaik told top officials and collectors of the 12 districts, which are put on alert following the IMDs forecast.

He had a video conference with the district collectors of Ganjam, Gajapti, Puri, Jagatsinghpur, Kendrapara, Bhadrak, Balasore, Mayurbhanj, Jajpur, Cuttack, Khurda and Nayagarh.

Patnaik also directed the district collectors to prepare an evacuation plan keeping in view the IMD’s forecast and shift people living in low-laying area and also from thatched and mud houses in order to save their lives during the possible calamity.

In a bid to boost the morale of the district collectors, who are working day in and day out in the COVID-19 management, Patnaik said,”We have in the past faced many very severe cyclones like Phailin, Hudhud, Titli, Fani and Bulbul. We can also handle the challenge now.”

The threat of the fresh cyclone, comes a year after cyclone ‘Fani’ barrelled through vast parts of Odisha on May 3, 2019, claiming at least 64 lives and destroying infrastructure in power, telecom and other vital sectors.

Odisha was also hit by cyclone ‘Bulbul’ in October, 2019.

With regard to the impact on the Odisha coast, the IMD issued yellow warning (be updated) and forecast squally wind speed reaching 45 to 55 kmph gusting to 65 kmph is likely to commence along and off south Odisha coast from May 18 evening.

The IMD also issued an orange warning (be prepared) for the state, saying squally wind speed reaching 45 to 55 kmph gusting to 65 kmph is likely along and off the Odisha coast from May 19 morning.

Special Relief Commissioner P K Jena said the state government has kept all its apparatus ready to meet the eventuality.

“All fishermen are now out of the sea as we have been preparing for the eventuality for the last two days,” he said, adding all the line departments have been kept in readiness.

“We are also in constant touch with the Indian Coast Guard, IMD and NDRF for any requirement,” Jena said, adding that Chief Secretary A K Tripathy has also apprised the Union Cabinet secretary about the state’s preparedness.

During a video conference with Cabinet Secretary Rajiv Gauba, Odisha chief secretary A K Tripathy made a request to temporarily suspend ‘Shramik Special’ trains passing through areas in the state that are likely to be affected by the cyclone.

Jena said the impending situation could create problems in receiving the passengers and taking them to quarantine centres as per the COVID-19 guidelines.

He said of the 809 cyclone shelters in the 12 coastal districts, 242 are used as temporary medical camp for the returnees coming from COVID-19 states.

The government has also suspended leave of all government employees in 12 coastal districts.